Learning to Succeed: A Mother’s Gift to her Children

It’s so hard these days to decide which type of parent you want to be. I want to supportive of my children. Yet I want to give them the room they need to figure out who they are and grow.

Puck is a very cautious child. Part and parcel of his learning disability is an irrepressible need not to fail. Ever. Even if it means not trying. And it’s hard to push him.   want him to develop confidence and be comfortable. And sometimes that might mean not trying. But if he never tries anything, he’ll never know he can do it and be confident. So I encourage him to try.  Every time. And be confident that he can try. And be confident that if he falls, he can get back up and try again.

When we took off his training wheels on his bicycle, he was very clingy. Before strapping on his helmet, he gave me a look that was a mixture of fear and angst. He didn’t want to fall. He wanted someone to hold the back of the bike so he wouldn’t. At first, he was so afraid, he couldn’t even pedal. It took weeks and weeks for him to figure out how to balance the bike on his own. My poor husband was breathless after each attempt. He fell, more than once, and needed to be scraped off the pavement, hugged—and sometimes, that would be it for the day. He wouldn’t try again. And then the next day, we’d coax him back on.  And he’d give me the same look, but get back on. So many days. And then—success! He made it halfway up the street.   And once he’d done that, around the block. Then to the park. He fell a few times, but once he’d realized he could do it, he became determined to do it again. And he did. And I was so proud.

[bctt tweet=”He fell a few times, but once he realized he could do it, he became determined to do it again. #success #motherhood #children” username=”LiveBySurprise”]

Flower is such a different child than her brother. She’s eager to learn. And she seems to understand that failure might be part of that process. At six, she’s starting to burn through books – trying the new sounds on her tongue. Stretching out the words and learning to understand them. Don’t help me, mom.  I can do it.

And although she’s almost three years younger than her brother, she learned to ride her bike the year after he did.  It only took about three days.  Her face determined. Don’t hold me. And then she’d fall. It’s so hard not to run in and scoop her up. Especially because that’s what Puck needed. Needs. But with Flower, I need to sit back and watch. She quickly figures out if she’s hurt or not. And sometimes, even if she is – even if she’s bleeding, she jumps back up, says “I’m OK!” and brushes herself off.  And gets right back on.  And I’m so proud of her too. 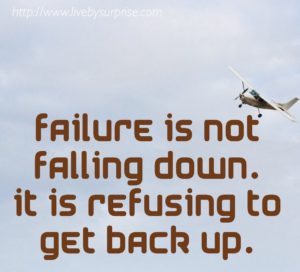 I have two very different children that I have to parent in very different ways. And who knows which of the two their brother will be. Or maybe he’ll be something different all-together. But we have another few years before his bike riding days. Either way—I’m determined that my goal for all three of them is exactly the same. I give them the gift of encouragement. They need to learn how to try—even if they may fall. They need to understand that I’ll be there to pick them up if they need me to. And to encourage them to keep trying.

And I’ll stand back and be proud when they succeed.