This week we went to the mall in Lelystad, Holland – it’s an outdoor mall called Batavia Stad Fashion Outlet. There are a lot of high end stores at the mall. So far, it’s the closest thing I’ve seen to an American mall. It was a contemporary town square though – with cobbled stones walking you to all your favorite higher end stores including Addidas, Asics, Converse, Lee Jeans, Levis, Hugo Boss and more.  And there’s a McDonald’s that has McKrokets (the croquettes that are very Dutch) and freits with special sauce (mayonnaise).

Hubs and I weren’t particularly interested in shopping – but while there, we discovered the ship making yard – the Bataviawerf.  It cost €11 each for us to get in, but it was completely worth it.

The Batavia was a working ship built in 1628 for the Dutch East India Trading Company. It shipwrecked on its maiden voyage but is infamous as a result of the mutiny that followed the sinking. There is a fully outfitted replica at Bataviawerf in Lelystad.

The replica was created over ten years as part of a youth employment project – to teach young people various skills related to shipbuilding.  The ship was built using the plans from the original ship as well as the materials (woods), tools and methods as were originally used in the 1600s.

We got to see the skeleton of the replica of the Dutch ship De Zeven Provinciën – which is being built in a way similar to the Batavia.  There were also workshops for the blacksmith, a sailmaker a woodcarving and ships tackle/rope making.  (This is the woodcarving shop.)

They did have guided tours, but they were completely in Dutch, so we decided to go it alone.  All of the different stations were very interactive. We saw some children making rope, one was helping the blacksmith, and there were some stocks that were very popular with both the parents and kids for taking pictures.

This is the bones of the De Zeven Provinciën.  They were huge – and they had demonstrations on the traditional equipment they used to bend and shape the wood.  There were three levels to climb up and around the entire ship so you could observe the craftsmanship.

Once we’d visited all the different areas, we went on the replica of the VOC-Retourschip Batavia. 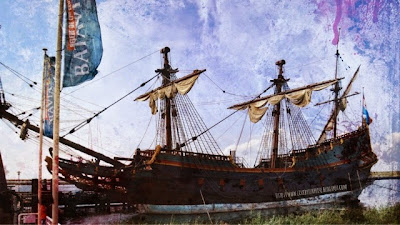 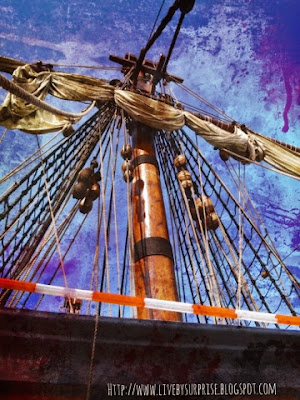 You could tour the ship from bow to stern and right down into the bowels of the boat. I was in the HMCS Victory in Portsmouth, England – it felt slightly more authentic (it was clear that this was a more recent creation) but the boat was very impressive.  Hubs is a bit of a sailor (it’s a Dutch thing) and he had a great time being my own guide and telling me all about the different parts of the ship.

The ship is a replica of one used by the East India Trading Company in the 19th Century.  There was a lovely, large map room at the front of the boat with a big window. The furnishing was a lot more sparse than movies like Pirates of the Caribbean would have you believe. 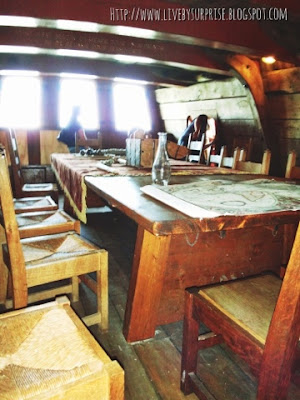 We had Bae in our backpack carrier, but it was a bit of a tight squeeze in some parts of the ship – I had to out my head at an odd angle to get through and poor hubs practically had to squat to his knees.  We ended up taking Bae out of the carrier and just passing him in and out of the different doors and up and down the short flights of stairs.  For that reason, we didn’t bother going into the cargo hold. It would have been completely impossible to carry Bae – there was a guy down there who was about my height and he was on his knees.  And there were a lot of stairs.  I really wouldn’t recommend it for anyone experiencing a mobility impairment or with difficult to control children.

The boat was in a large harbour near a lift bridge.  We saw some lovely 30-45 foot sailboats waiting to get through.  And at the mouth of the harbour is a large wire sculpture called “Exposure“. It was created in 2010 by British sculptor Antony Gormley. On his website he suggests the sculpture will react over time to the changing environment.  It does not sit on a plinth – so over time, with the rising sea levels caused by global warming, the sculpture will be slowly buried. 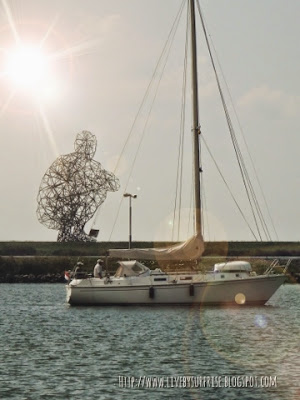 Or if you’ve missed a couple of posts – check out what else we’ve been doing in Holland.

Our adventure isn’t over yet!  Check back for more in a couple of days!  Tot zeins!

2014-08-11
Previous Post: A Genius in the Making
Next Post: Six Things I Learned From Being in a Bad Marriage