Bergen aan Zee – A Day at the Beach

On Monday, we ventured out to the sea. Now, prior to leaving, I had planned on packing my swimsuit – but hubs advised we weren’t likely to go swimming. And suddenly we find ourselves on a beach at the ocean. And the water was warm enough to swim. Sigh.

Observations? Dutch people are F-I-T. Wow. There were some nice bodies at the beach. And they had no issues with their bodies at all. Not that I was looking.

As well, they don’t have all the hang ups Americans have about their children swimming naked. A number of the younger children I saw weren’t wearing clothes. A girl without a top. A boy without a bottom. A couple of naked 7 year-old twins, blonde as can be playing in the sand and the tidal pools. And more. And they were having fun and not worrying about it. (And I really hope I didn’t stare…I was just so happy to see them having so much fun and not worrying about it, and it is such a rare sight for an American like me).

There were also a few topless sunbathers – but a lot fewer than I expected to see – and they were all very modest. (Thank goodness, because I also might have stared because I’m so unused to it).

It was a beautiful white sandy beach. There were grassy sand dunes that rose up just as we entered the beach – and about 100 metres of sand before the ocean.

People rented shelters – as it was quite windy and sunny, so the shelters actually pointed towards the beach to shelter from the wind instead of the sun. Some people had their own, but most people rented – they had marketing on the back of them. Further up the beach, they had movie quotes. 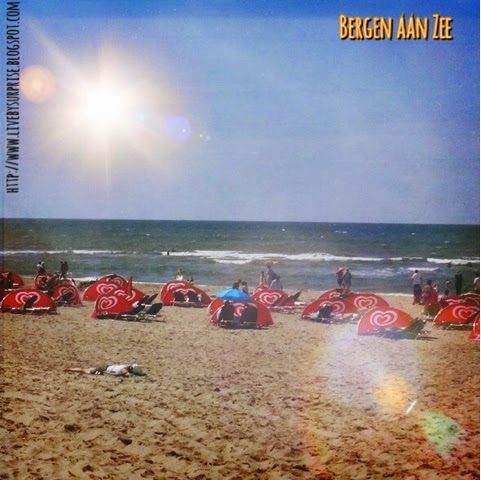 It reminded me much of the seaside towns in England. They had rows of little cabanas you could rent to put your valuables in. 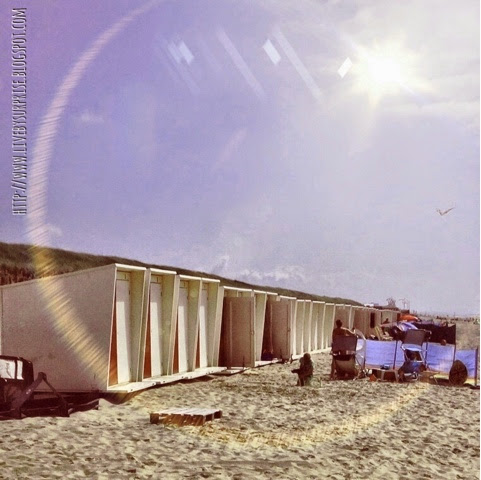 There were a number of restaurants right on the sand for “eten & drinken”. We chose one higher up on the sand dunes – with an incredible view of the ocean. We had a nice lunch – hubs had an egg on toast with kaas (cheese) and I had a broten (bread) and stuffings combination. It had a three pieces of bread, some egg salad, ham, smoked chicken slices, lettuce and peppers. And a croquette on the side that was by far the best I’ve had so far. I also had an iced tea – which is also quite different from home. It’s sweet and lemony and has fizz like a soda. 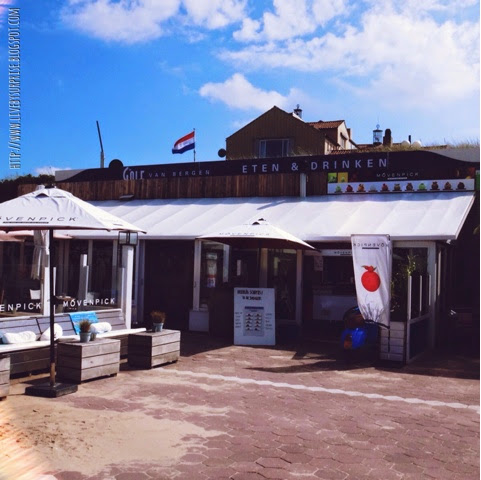 When we were done, we walked up to the ocean and down the beach. The water was a lot warmer than I expected. It was shallow a long way out and wavy. And there were a lot of people swimming. We dipped our toes in – and took off Bae’s clothes and let him paddle in a tidal pool. He put a nice big handful of sand in his mouth. I gave him some water to wash it out. Thank goodness my husband understands that kids have to eat their pound of dirt. My ex would have flipped his lid (which is why I never took him to the beach with Puck).

There was a nice little boy in the pool – he was about seven I think (he looked younger than Puck but older than Flower). He had a net and was looking for little fish (I didn’t see any, but he was having a good time). He realized that I wasn’t speaking Dutch, and said to me (in Dutch) – “I’m Dutch!” by way of introduction. “I’m English” I replied, in English. And he said “oooohhh, English, I learned that in school” – in Dutch. I guess my language training in French and German, although rusty, is coming in handy. I’m beginning to pick out the different foods on the menu too. Tomate, ui, ei, slaa, kip – tomato, onion, egg, lettuce, chicken. Most restaurants have given us the English version of the menu – but I still like to look at the Dutch one.

Anyway – it was a lovely day by the sea. And after we returned to my sister in law’s flat, we went out and picked up a bathing suit – it’s not very flattering – but we’ll he’s back to the beach again before we leave.

Read about our adventure at the Cheese Market in Edam on Friday!

Or if you’ve missed a couple of posts – check out what we did last week:

2014-08-06
Previous Post: Our Day at the Zuiderzeemuseum
Next Post: What Good is a Food Vacation if You Don’t Try the Food the Country is Famous For??