Getting Up to Mischief in the Red Light District in Amsterdam

This week, my sister in law volunteered to babysit so Hubs and I could do some adult type activities in Amsterdam. We rode our bikes into the train station again, but missed the first train by two minutes (luckily they come every half hour). We hadn’t purchased our tickets in advance, but there was a machine. Then we discovered that the machine only took coins or Maestro (the European version of Mastercard). The restaurant next door told us that the train’s “Chief” should have change. He didn’t. But he let us take the train anyway – because we’d tried our best. We had money, we just couldn’t use it.

This is the outside if the train station (as an aside, on the way home in the train the last trip, I fiddled with my new camera and tried out some of the non-auto modes on this trip. It has a panoramic mode that was perfect for Amsterdam).

We got into Amsterdam around 930. Instead of buying a canal tour pass, I wanted to walk the streets so I could absorb as much as possible. I did get a picture of the canal “bus” that I promised in my last Amsterdam blog:

And some stunning pictures of the canals and buildings:

We toured slowly through the streets from the train station to the Anne Frank house (the Annex made famous by Anne’s diary was saved and restored. It has been expanded and turned into a museum). The line there was about three hours long. Even though it wasn’t quite ten yet. And we didn’t have our Golden Ticket with us. So, after a brief discussion about the short amount of time we had in Amsterdam, we decided not to wait.

Instead, we headed to the Royal Palace, which was a few blocks away. On our way, we passed the mall: 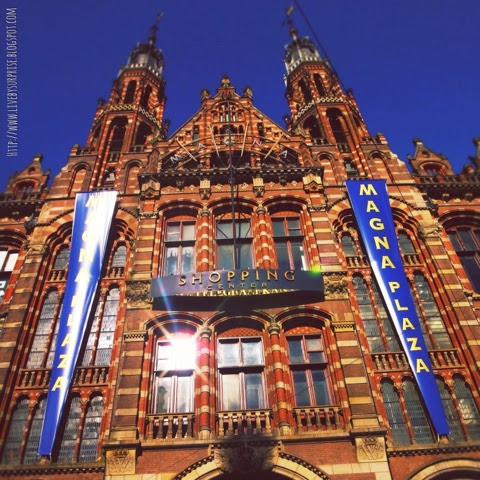 Yes – this magnificent building (called the Magna Plaza) is the mall. I wanted to pop in and see what the inside of this centuries old building looked like, but we had a packed day, so we continued to the square outside the Royal Palace.

The Palace fronts onto a large square, with a large wax museum (Madame Tussaud’s) and banks and cafés surrounding it. The palace is in the middle, the wax museum on the left. Unfortunately, we weren’t able to tour the palace as they were doing renovations

All the buildings in the square were absolutely stunning. This photo was taken later in the day as we walked back to the train station. You can see how popular it was. In the square we found a Roman soldier and the tall figure of death, holding a large scythe. Similar to Times Square, these figures had a pouch to hold the money they made from having photos taken in front of the palace with tourists. They were a little better dressed than the tattered Elmo in Times Square, but as I didn’t intend to pay them, I didn’t take a photo.

We struck back towards the train station to to your through Amsterdam’s infamous Red Light District. It was still fairly early in the morning, but there were already people crawling up the streets. We passed “The Museum of Prostitution” and a motley assortment of strip bars, sex shops, bars and drug dens. A few of the windows were already inhabited with red lights shining above them. Obviously, we did not partake in any of the traditional activities one undertakes in this section of the city.

My husband (who believe it or not toured the district several times as a little boy with his grandfather) says that the area has been cleaned up quite a bit since his youth. He suggested that the general feeling was a lot safer than it was in his youth. And, as a way of proving his point, there were a group of grey haired tourists following a tour guide through the streets.

I imagine the area is more impressive looking at night, but as we had to be back before dinner, we weren’t going to find out on this trip.

Although, while we were there, I did do something naughty… 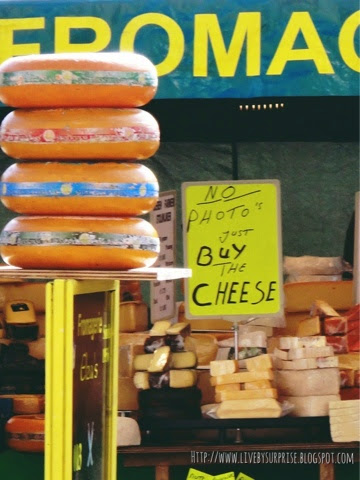 Yes….that’s right. Not only did I take a pic, but I didn’t buy any cheese.

Hopefully I don’t get arrested in the airport.

After the Red Light District, we headed up to the museum district to tour around the Rijks Museum. We had a nice lunch in the café. It was reasonably priced as well. We split a meat and cheese plate showcasing the region’s foods and had some wine.

I was surprised by the number of people boldy taking pictures of the paintings inside. There was security and museum staff everywhere. We weren’t even allowed to take our backpack in the museum. Flash photography (and light in general) affects the oil paint – reducing it’s vibrancy for future generations. We were respectful and didn’t take any photographs of the collection inside (including Rembrant’s “The Night Watch” – which was absolutely magnificent).

You could spend days in the huge museum and not see the entire collection. As we had a limited time (and my foot was starting to hurt), we focussed on the Dutch masters. An amazing collection which included paintings of all different mediums of Amsterdam centuries ago, the canals lined with brilliantly coloured new buildings and no cars. There were also pictures of farming and windmills, rich people and food. And furniture – a tiny canopied bed from the 15th century (people slept sitting up back the , so they didn’t need a body sized bed), a babies bassinet, a fire place. And some fine examples of Dutch pottery. (I wish I could show you – but if you ever have the opportunity, you should go!)

From there, we walked back to the train station and headed back to my sister in laws. Bae had a lovely day and we came back with some stories to tell.

If you’ve missed a couple of posts – check out what else we’ve been doing in Holland.

Our adventure isn’t over yet! Check back for more in a couple of days! Tot zeins!

2014-08-14
Previous Post: Six Things I Learned From Being in a Bad Marriage
Next Post: Pannenkoeken – Heaven on Your Tongue in Holland