How We Got the Golden Ticket in Amsterdam

We rode our bikes to the train station and caught the train to Amsterdam on our fifth day in the Netherlands. My in-laws live about an hour outside of the city. It was an overcast day, but the rain held off until we went home.

When we arrived, the train station was bustling with people going everwhere. The train station felt familiar – it had the same vibe as any large station in North America. The floors were white and sparse, there were stores and food outlets in the hallway below the platform, the scents and smells you expect in a big city. The building, from the outside, was absolutely stunning. 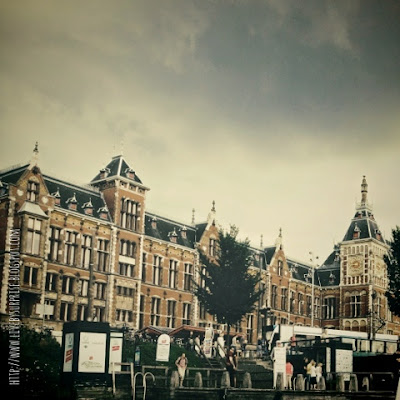 Amsterdam is just beautiful. There are canals and bridges and flowers and bicycles everywhere. 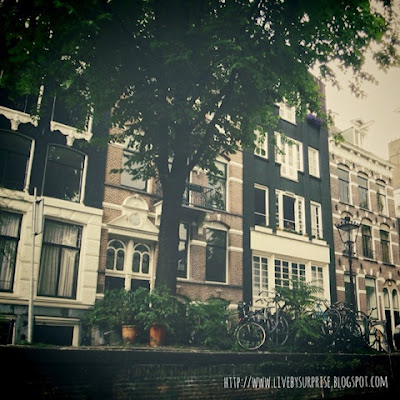 We went across the street from the station and picked up a day pass for the canal “bus”. There are several different buses that travel different routes on the canal. Hubs says he’s been at least 8 times since he was eight years old. And he loves it every time. I’m so happy that Bae and I can experience this with him. It’s been very interesting to see the country through his eyes. 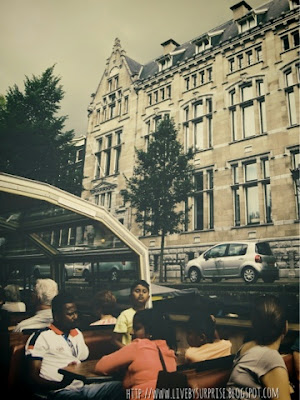 Bae was well past morning nap when we got on the ferry. It was not a fun hour ride to the museum. We hopped off at the market stop – one before the museum district.

We walked through the market, which was spread up a narrow commercial street – made even narrower by the vendors stalls. All sorts of goodies were being hocked – I saw nail polish at one, colorful wigs at another – even fur vests and a variety of other clothing including cheap t-shirts (in English!) It reminded me a bit of a flea market back home.

We stopped in a little cafe called Boss and had a coffee and a juice for Bae outside. I was reminded again how liberal the Europeans are – there was a table of people chain smoking behind us, and there were dogs everywhere.

Bae was still restless after his drink, so we paid and got going.

Amsterdam is home to the Van Gogh museum – as Van Gogh is one of the most famous Dutch painters (a club which also includes Rembrant).

Van Gogh is also one of my favorite artists. I studied some of his work while I was in college, and I developed an appreciation for the breadth and depth of his work. He changed his style seemingly on a whim, and passionately painted until the muse pointed him in another direction. For the last couple of years of his life, he painted at least one painting a day – so there’s a lot of work to appreciate.

The episode of Doctor Who he appeared in is my daughter’s favorite episode – and two years ago, we travelled four hours by car and vacationed near an art gallery that was featuring some of his paintings. The opportunity to visit at the gallery devoted to his work in Amsterdam was simply too much to pass up.

Then we got there. And the line was ten deep and went all the way down the block. And Bae still hadn’t slept. I was crushed, but realized that we couldn’t wait in line. I said to hubs we should just skip it and hopefully we’d have another opportunity later in our trip.

As we walked away from the museum, past the long line, hubs stopped to talk to a member of the museum staff. He asked if the line was always that long. The man (I’ve named him Willy) said that it was usually longer an went around the corner. Hubs asked if it was shorter midweek or early in the morning when the museum opened. Yes, Willy said (looking at Bae with a twinkle in his eye) – but the museum has a policy – if you have children, you can go to the front of the line. And then, this wonderful man escorted us to the front of the line. 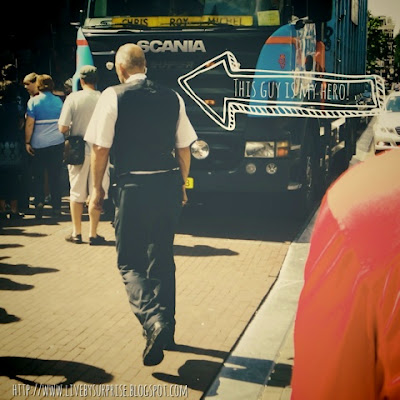 This is the line from the front: 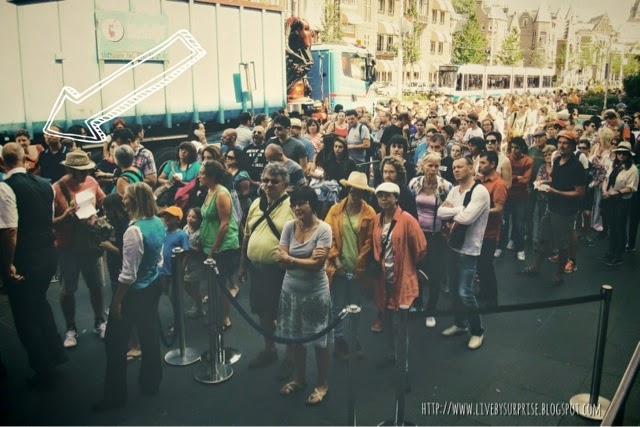 By the time we’d paid and entered, Bae was blissfully sleeping. And we got to wander around and see all the wonderful works by Van Gogh. In peace.

We drunk in the Irises, the Sunflowers and the Almond Blossoms (my daughter’s favorite). We admired at his Room at Arles, his Self Portrait in a Straw Hat. We read and understood his struggles with mental illness, his relationships with his family (his letters to his brother Theo) and with the French Impressionists that so changed his work. We took so much pleasure in viewing the many, many paintings of Dutch landscapes, farm workers and fields that he created. We didn’t see the painting of the Exploding TARDIS, and for some reason, the Church at Auvers and the Parisian Café weren’t there (I suspect they’re in the Parisian collection, possibly at the Louvre, or maybe in London – but I guess that’s aother trip or two).

It was exhilarating – and by far the best part of our trip so far. After the museum (and obligatory souvenirs), we caught the ferry back to the train station and went home.

We were limited with what we could do in Amsterdam with Bae in tow, but we did get the Golden Ticket – so all in all it was a good day. And my sister in law has volunteered to take Bae for a day so we can go back and see more of the city itself. Next week we’ll visit the red light district.

Or if you’ve missed a couple of posts – check out what else we’ve been doing in Holland.

2014-08-09
Previous Post: What Good is a Food Vacation if You Don’t Try the Food the Country is Famous For??
Next Post: A Genius in the Making