Pannenkoeken – Heaven on Your Tongue in Holland 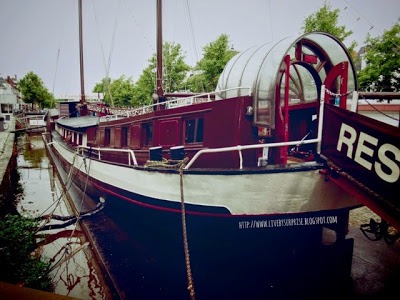 A pannenkoek or pannekoek is a Dutch style of pancake – one that you absolutely must partake of if you ever visit the Netherlands. Pannekoeken are traditionally much larger (up to a foot in diameter), and thinner than they are in the good old U-S of A. Not just that, but they also add just about anything on top to enhance the flavor of the pancake.

We went to the Pannnekoekschip (Pancake ship) which is situated in a canal in the Dutch town of Groningen.

It seemed like the best place to have my first Pannekoek experience – most restaurants in Holland serve some version of Pannekoeken, but you really need to go to a Pannekoek Haus (or ship in this case) to have the most traditional kind.

Unlike in America, Pannekoek are not a breakfast meal. In fact, the Pannekoekschip didn’t even open until noon.

The ingredients to make the pannenkoeken are the same as here – flour, milk, salt and eggs. The difference between American and Dutch (aside from the size and thinness) is the toppings you can have.The topping offerings at the Pannekoekschip included bacon, sausages, pepperoni, potatoes, apples, cheese, cinnamon and sugar or raisins – or some combination of those flavors.

I settled on the apple and cinnnamon: 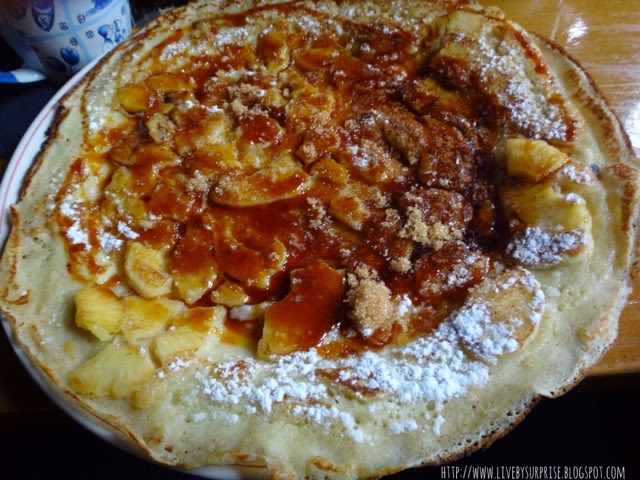 This photo, of course, is after I added mounds of brown sugar and treacle (a Dutch type of syrup made from beets). They were available in big jugs on the table: 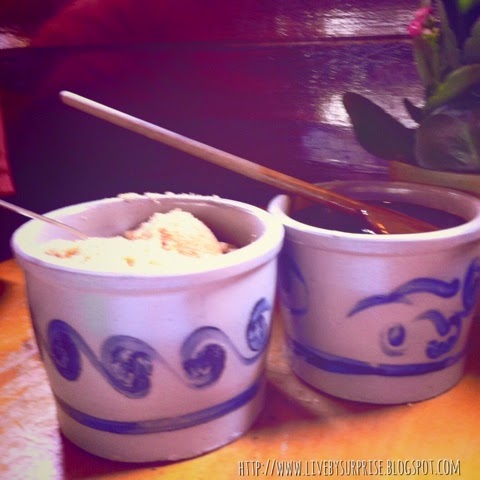 Not the most hygenic way to serve it – but I’ve found most European countries aren’t as hung up on hygiene as we are – they also allow dogs in most stores and restaurants. I was pleased that most restaurants only have smoking outdoors though.

A few bites and I was hooked. The powdered sugar and cinnamon melted in my mouth along with the apples and syrup and the crumbly brown sugar. It was an explosion of sweetness in my mouth. I finished every bite. Then I went back to finish my husband’s.

Hubs’ serving had potatoes, sausages and a pepperoni type meat on the top. It was much more savoury than mine (but still absolutely fantastic) and it came with a salad of lettuce, carrots, cucumber and kernel corn mixed almost like a coleslaw. 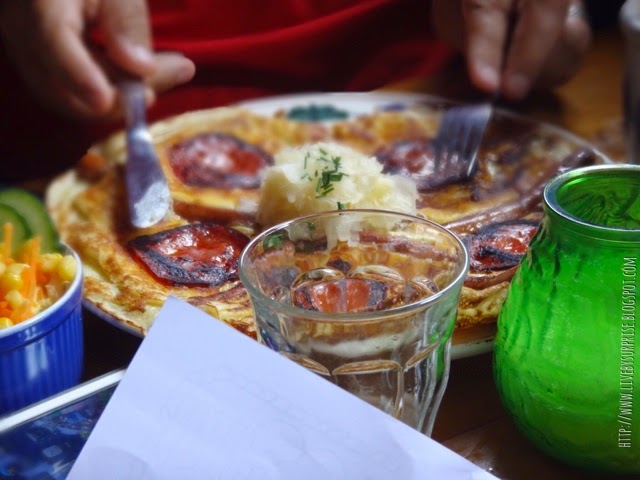 We picked up some special mix – so we can try to replicate it at home. I understand that although the ingredients to the basic pannenkoek is the same as our pancake, the batter is much more liquidy, like a crepe. I can’t wait to try it at home with some real Canadian maple syrup (yes, I’m a bit of a syrup snob. Since my trip to British Columbia, it was goodbye Aunt Jemima, hello Canada). The treacle was OK, but I prefer a good maple flavor.

I think you’ve all figured out by now – the part of Holland that I’ve enjoyed the most (outside of the fantastic sites) is the food – and our day at the Pannekoekenschip was no different. It’s been a fantastic trip so far – in case you’ve missed a few posts, you can catch up.

One or two more posts coming about our trips! Check back for more on Monday! Tot zeins!

2014-08-16
Previous Post: Getting Up to Mischief in the Red Light District in Amsterdam
Next Post: What’s a European Vacation if You Don’t Visit a Castle? – Our Day at Muiderslot