Coparenting: When Back to School Means Back to Conflict

The problem with negotiating a “one-size fits all” parenting agreement is that it’s impossible to anticipate what types of changes the children are going to experience as they get older.  The after summer transition to a new grade can be particularly trying as both parents try to adapt to new teachers, more homework, different lunches, different extra-curricular activities and new friends.

I’m managing thus far – but sometimes it seems like pulling off these transitions is a feat that’s just too much.  It seems my ex views the new school year as an opportunity for a new power struggle over one thing or another.

The children both have agendas this year.  That means (for me) making sure that the teachers know if information goes home on their father’s time, information doesn’t get sent back to their mother. Not that their father ever manages to do much with it.  He’ll lose forms, fill them in improperly, not pay for school trips or tell me that it needs to be taken care of.  I always ensure that information is passed to his home, but the stream never flows back my way.

This year in particular, part of the struggle seems to have to do with the fact that my ex hasn’t shown his true colors to the new staff yet.  I suspect that we’re a subject of conversation from the previous year’s teacher to the current.  My daughter’s Grade 1 teacher is working alongside the same Grade 1 teacher that my son had.  They must talk about it.

Our final court order sets me as the children’s primary caregiver.  When the children have an event coming up, or an extra-curricular activity that involves after school time, or they have milk or pizza day, I always ask their father before filling out the form and providing payment.  Apparently he thinks this is not good enough.  He needs to fill out the form on his own too.  Which gets confusing for the school.  Especially as he’s completely incapable of filling out a form properly.

This year, one of the first forms that went home was an “introduction” form for my son.  My ex did not use the form as an opportunity to advise the teacher about Puck’s learning issues.  For the health questions, he didn’t mention that our son has asthma and his puffer is in the office.  He did fill out some basic questions about how, as a “social” goal for our son, he wants our son to make friends this year.  (Really?)  And on the back, he filled in father’s name and phone number and suggested our son’s legal address is father’s address.  He made sure he covered the “important” things.  You know, not like the child has a mother who has a phone number as well.  Or that in the event of an emergency they can also call his stepfather.  No…those parts of the form were left blank.  But so long as he asserted that his address is the one they should send stuff to.

The funny thing is, I suspect that my ex-husband is insistent that he’s able to fill out the forms because he wants the teachers to think well of him.  His illegible scrawl and spelling/grammar that almost match our 9-year old’s grade four reading level do most of the speaking for him.

But when he provides inappropriate information that I end up having to correct, it means I actually have to remind the teacher and the school that this is an issue.  And that they should never ever use his information because it’s always inaccurate or missing.  He provides his own examples so I don’t have to explain in to great detail – but this year, even before meeting him, the teachers must have an understanding of what I have to deal with.

As far as the administration, I think (hope) that I’ve finally gotten them to understand my difficulties.  They never suggest any more that our meetings should take place jointly.  In fact, the last IEP meeting we had, they insisted should be held separately without my intervention.  As I’ve said before – the IEP meeting we’ve attended together tend not to be about our son.  They’re either about my ex – or they’re about our toxic relationship.  It would be nice if we were able to have a constructive meeting where both parties received the same information and were able to discuss our son’s progress.  It’s just not possible.  My ex comes into the meetings (from what I understand, whether I’m there or not) as if he’s coming into a battle.  He doesn’t receive information.  He doesn’t share information.  He bullies and blusters and pushes and in the end, I think the teachers and the special education team just ignore him.  They view it as a “has to be done”, but don’t put any stock in it.

My IEP meetings have now gotten to the point where they’re less focussed on my ex and more focussed on my child (as they should be).  Instead of accusatory and inflammatory comments being made, we have a peaceable exchange of information and suggestions.  And in the end, most of the time, I’m happy with the final product (even if they don’t always use it as intended…but I’d hazard that’s an issue for most IEPs).

The parenting plan clearly didn’t anticipate any of these issues.  We did discuss in parenting coordination, and my ex knows (or claimed he knew at the time) how difficult he’s making it, and he agreed to change.  But a tiger can’t change his stripes.  So I look forward to at least seven more years of transitions – until my son hits 16.  I’m hoping that they’ll slowly become less annoying, or at least less necessary.  But we’ll see.

In the meantime, I’m trying to be better not bitter.  I’ll continue to keep him informed and ask for his input.  But I’ll still make sure the school is aware that I’m the one who has the final say.

What about you?  Is there a period of adjustment between you and your ex when your kids go back to school?  How do you deal with it? 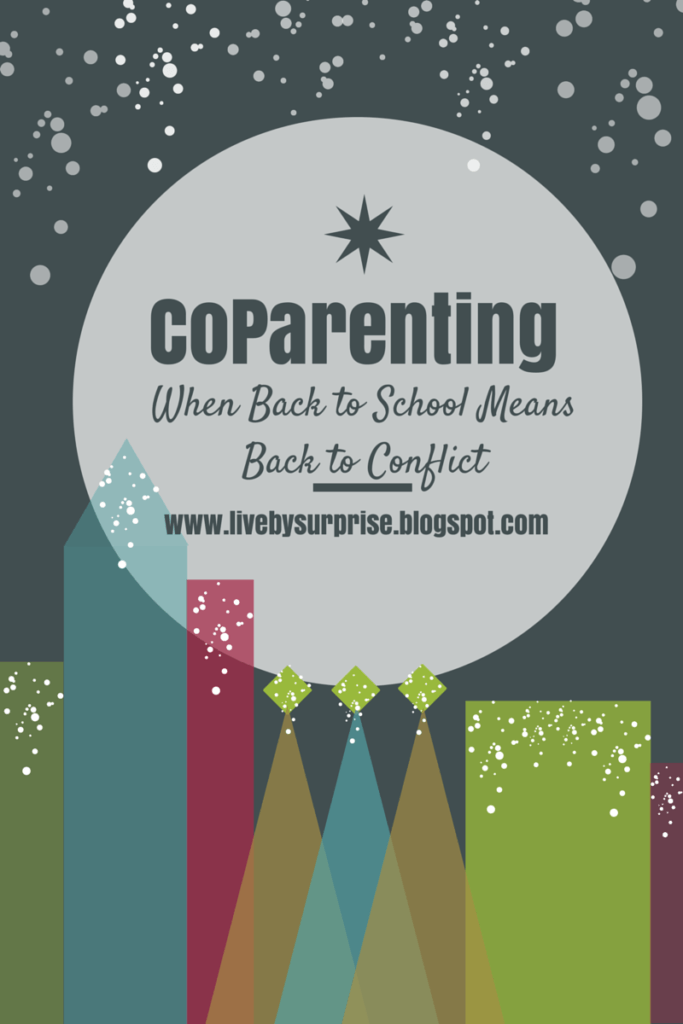 2014-09-22
Previous Post: 7 Ways to Cope When Your Ex Wipes Out Your Kids’ Wardrobe
Next Post: Goblin Kingisms