Sorry guys – I don’t have a ton of time to write today but I thought I’d bring you a few Goblin Kingisms from this week’s e-mails (you’ll recall my previous posts on his issues with acyrologia):

“I feel that you may have underling (sic) issues.”

“When I stated a fix plan, this was to lessen the sabre rattling.”

“I do have concerns of my comment statement, but I will put that on the back burner for the time being.”

Just to be clear – I do have some understanding of what the first statement means (I’m assuming he understands that my “underlying” issues are that I have to deal with an idiot on a daily basis.) As to the other two statements, I have no idea.

I suspect I struck a nerve somehow this morning. As I’ve said, I’ve been engaging a little too much. But there were some things I needed to address in my exchange e-mail – he’s suggested I should be running my meal plans by him. I very politely told him to fuck off.

He’s also threatened to call my boss because he thinks I’m responding to my e-mails on work time. Nice. 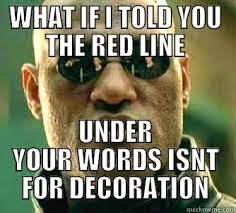 2014-09-29
Previous Post: Coparenting: When Back to School Means Back to Conflict
Next Post: 6 Steps to Make More Time for Blogging