Should Your Sister be Your Best Friend? Is She? 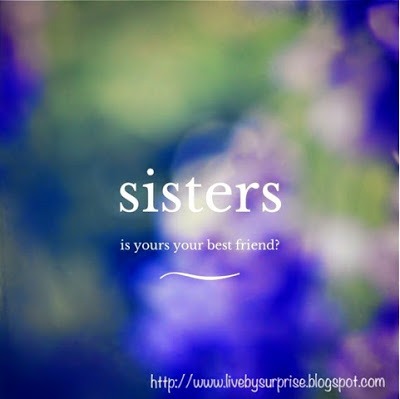 There are all these quotes about sisters – and how they’re your first and only true friend.  Don’t get me wrong – if anyone hurt my sister, I’d be in their face like the overattentive perfume lady at the department store – but we’re not friends.  We never have been.  And it’s likely we never will be.

My younger sister and I are only two years apart in age.  We had an average childhood – and being so close in age, often fought like cats and dogs.  Physically, my sister favors my father – with dark hair, olive skin and green eyes, whereas I favored my mother – although she wasn’t tall like I was (her brothers are), I have mom’s red hair, pale skin and blue eyes.  Our personalities were opposite as well – where I favored my father’s dark sense of humor, my sister was more straight laced.  I’ve never been a morning person, I’m more bookish, introverted and reflective.  In school, I was focused more on grades than my social life.  My sister was always the sunshine in the morning – waking up happy and determined to see everyone else happy too.  She had tons of friends through school and after.  Being an introvert has made it difficult for me to find and keep friends – I think I’m often misunderstood, and can be a bit awkward with people at times.

I can remember relatives – our grandmothers, aunts – telling us that sure – we didn’t seem to get along at six or nine or even twelve – but by the time we were adults, we’d be the best of friends.

Our parents divorced when we were 12 and 14.  And it changed everything.  My father and I were caught unaware – I think we were just living our lives while my mother was quietly suffering and in the end, planning her escape.  Having been through my own divorce now, I have a much better understanding of the situation – but then…

My sister witnessed things that by chance, I did not see.  And I was a teenager, starting high school, worried about having few friends, wrapped up in my own issues, and just not looking for it.

My father, as he left, expressed a preference for keeping me only.  I was his favored child – because of our similar personalities.  With him, my sister was difficult and moody, as teenagers can be, and he didn’t know how to deal with her.  And certainly she was more so because of his blatant favoritism.

My mother wouldn’t have split us up – even if we weren’t the best of friends.  And yet, I was difficult and moody with my mother – our personalities were different as well – and she didn’t know how to deal with me.

Even so – eventually the tear between my father and my sister became too difficult and she stopped seeing him.  The pressure on me was enormous.  And eventually, I saw what had happened through her eyes – and I stopped talking to him too.
My sister and I married the same year, within one month of the other.  She married her high school sweetheart right upon her completing college and moved to his hometown in BC.  They’d been dating since she was 15.  She got a green card and worked at a day care before opening her own, in home day care as her children were born.  Later, she went back to school and now she’s an RN at a Canadian hospital with eyes on a management position.

Not to be outdone by my sister – I married the first guy who showed me any interest right out of college (that’s a story for another blog).  I’d done a three year degree in two years.  My career prospects were high – but the marriage…and oh well.  I’m getting back to my career now.

The end result though – she moved away – I married a narcissist who consumed me – by the time I got out of my marriage – it was too late.  We both had children, she visits my mother twice a year, we buy presents for each other’s children at birthdays and Christmas, but that’s it.  At family events, we chat – but we don’t talk.  Neither of us knows who the other is.  Occasionally (rarely) we’ll have an in depth discussion about our families or about our mother – but essentially, we’re strangers.

I’ve tried.  I have – really.  My niece comes up and spends a couple of weeks with me and the kids every year in the summer.  It’s difficult for me to get across the border for a visit – because of the ex situation -but I’ve suggested joint vacations.  I’ve tried to arrange for her to come up early and stay longer.  I’ve invited them to stay at my home instead of my mother’s.

But there’s only so much I can do.

I’ve come to the conclusion that the relationship is what it is.  We’re never going to be those sisters that they wrote the quotes about.
And truthfully, I’m OK with that.

I have some wonderful girlfriends who will be my friends until we’re in our nineties.  (Well, they’ll be in their nineties, I’ll still be in my eighties).

I’m proud of her – she’s done some things with her life and her career that I don’t know if I would have had the courage to do.  Although I’ve developed a deep appreciation for nurses since the accident, I could never be one.

I enjoy spending time with my niece and I feel as though we have a good relationship.  In spite of my non-existent relationship with her mother, at least I’ve had the opportunity to get to know her and she’s gotten to know my kids.

I guess it will have to do.

What is your relationship like with your siblings?  Did anyone ever tell you you’d be the best of friends?  Are you?

2014-09-17
Previous Post: The Great Poodini – A Day in the Life of a Drama Queen’s Momma
Next Post: Use Your Voice to Change the World