When the Elf on the Shelf Goes Wrong

If you’ve been on the Internet at all over the past few weeks, you know that the Elf on the Shelf has been going wrong all over the place – as adults have gotten into the fun of the game.  There’s even a Facebook Page devoted to the little guy’s adult antics.

But I was amused last week to find out that the Elf on the Shelf at my ex’s sister’s house has been more than a little bit mischievous.  As I understand it, the little bastard wrapped their entire tree with not just one roll, but an entire package of toilet paper one night.  And on another night shortly thereafter, he pulled everything out of the children’s bathroom cupboard and spread it all over the floor, breaking and spilling a number of things on his merry way.

Now, I could be wrong, but my understanding of the Elf is that he’s supposed to encourage your children to be on their best behavior.   There are rules to the elf’s stay inside your home.  He (or she) must maintain a distance and provides regular reports to Santa on your children’s behavior.  Children are not allowed to touch the elf or she will lose her magic. The elf must never move or speak when people are home or awake, but can “move” from place to place when no one is around.

The Internet (and Pinterest) is full of hilarious images of elves doing mischievous things to the delight of the children.  But the things he (or she) does are supposed to be well meaning – like this one who wrapped their tree in Christmas Wrapping paper.

And it is amusing, like a certain Elf that went a little overboard one year.

I can understand children being delighted by the magic of it.  I can see how if the Elf were doing Toy Story like things it would be very amusing.

Don’t get me wrong – I’m definitely anti-Elf.  I’m of the – “forget the Elf in the other room, someone could be watching you all the time so you’d better behave” parenting philosophy.

Knowing my ex-in-laws, I suspect what’s happened is mom and dad are trying to out-do each other.  And they may have even thought it was funny as they were putting the plan into action.

Amusingly though, it’s not having the desired effect.  In addition to the fact that mom and dad had to clean up the giant “mess” that the elf made (and the kids made worse when they got into the bathroom), I’m told that the children have now started doing bad things…and blaming it on the elf.  One even wrote a Christmas message on the wall with permanent marker.

Given the way it’s going, I suspect at one point, one of the kids may even figure out something about their parents…

So parents – be warned.  If your elf is being more mischievous than anything else, you might want to report them to Santa.  Otherwise, you might be letting yourself in for some grief (and allowing your ex-in-laws to relish the Karma). 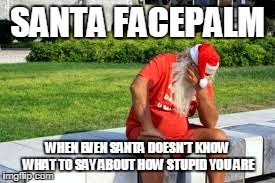 This is my last post before Christmas – wishing you all a very happy holiday – whatever you’re celebrating!