Compassion is a Verb

As a writer, I’m very familiar with the ins and the outs of the language.  If you’re a writer too, you might be reading the title of my blog thinking, no it’s not – compassion is a noun.  It’s a feeling.  It’s not something you do.

I’m here to tell you otherwise.

Last week – a very remarkable event happened.  One of my favorite writers, Lizzi Rogers of Considerings, wrote a beautiful piece.   It spoke of the need for “the village”.  The very same village that it used to be said was needed to raise a child.  The village that has disappeared in this electronic age of iPads and smart phones, single family houses and online shopping.  The village that was no where to be found during recent tragedies – children who have died in horrific ways.  Children who could have been saved – but the village that should have protected them was collectively too interested in themselves.

And then, Lizzi did something wonderful.  She sent her readers on a mission.

I’m proud to say that I’m part of this amazing movement.

Adding your own voice.

Re-joining the village if you’ve been absent. 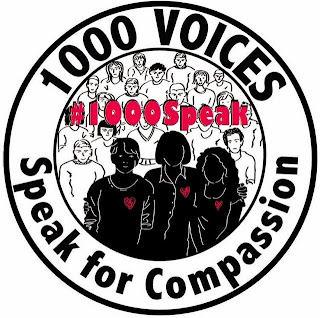 How: Write a blog post about compassion.
What it means to you.  Use the word as a verb instead of a noun. Inspire people, just as Lizzi did.  How have you made compassion part of your life?  How are you going to keep the movement going?

Don’t have a blog?  You
can still participate.  If you’d like to write something – ask the village.  Someone (me included) can host your post.

If you’re on Twitter, use the hashtag #1000Speak to inspire the village with your own acts of compassion.

If you want to participate and you just aren’t sure what to do, e-mail 1000speak@gmail.com – and someone will help.

Let’s all take the time to use our words, our compassion, one positive message from one thousand voices – and let’s change the world.  Join us.

Read more about the movement:

2015-01-19
Previous Post: Sunday Confession: This Blog is My Space
Next Post: A Blogiversary/Love AAF with DJ Lindsay Klein