As I’ve been leading up to it for the past couple of weeks, I’ll point you again to my “Compassion is a Verb” piece – leading up to today’s overwhelming examples of human compassion on over 1000 blogger’s sites as part of the #1000Speak campaign started as a result of an impassioned post by Lizzi Rogers last month. 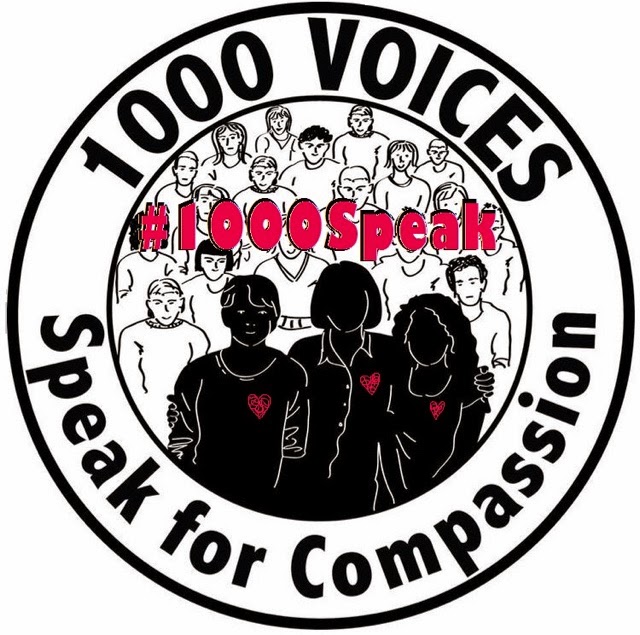 If you’ve read my blog before, you’re aware of my accident, surgery and stay in the hospital for nine days just before Christmas in 2010.  While in hospital, following my surgery, I was set into a ward bed with two other beds and a nursing station in the middle (as I needed constant supervision due to the blog clot in my lungs and my inability to get out of bed unaided). I had been in the hospital for four days by this point.  I was in pain, on some very strong medications, and I was completely exhausted as my body was trying to knit itself back together and I was mentally coming to grips with how to move forward.

Although I was confined to bed, I could hear what was going on in the adjoining rooms and the hallway, which was adjacent to my bed.  At night on the unit, they dimmed the lights around 8 PM so everyone could try to get some sleep.

On my first night, an older gentleman from a room down the hall from me started wandering the halls while everyone was sleeping.  Normally, I assume, this wouldn’t be an issue – as most of the patients in that particular unit had experienced a traumatic injury and were in for treatment.  This particular gentleman, in addition to whatever physical issue had brought him to the unit, was also experiencing some mental health issues.  The nurses were extremely overworked, and as whatever physical ailment he had did not confine him to his bed like myself, he was getting up while the nurses were trying to get everyone settled and do their hourly checks.

From my room, I couldn’t actually see him – and I’m still not certain what physical issue brought him to the unit (although he was walking – I could hear him dragging one of his feet and I could distinctly hear the placement of the metal leg of a walker on the hospital’s tile floor).

When I asked about him, he was described to me by my nurse as an elderly man experiencing problems with dementia.  And as he wandered the halls into the early hours of the morning he was calling one word only.

It was the confusion and the tenor of his voice woke me from what would otherwise have been a drug induced slumber.  Although the other residents of the room I was in were annoyed by it, my heart was breaking.  Likely, I had nothing in common with this man other than the fact that we lived for a short time in the same hospital.  He had lived his life.  Maybe he had kids, maybe he didn’t.  I suspect that he wasn’t working any more, but I don’t know.

Despite my inability to comprehend his life story and never actually having laid eyes on him – I was moved to tears.  As a mother.  As a daughter.  I understood from my own shoes what this man was seeking and was unable to find.  The comfort that only a mother could provide.

I felt certain that the person he was seeking is no longer with us, and no matter how much he wished it, his Mommy wasn’t there.

I don’t know what I would have done had I been able to move from my bed.  I was so distraught by his pain that I forgot my own.  I wanted to get up and give him a big hug, bring him back to bed and tuck him in.  I wanted to reassure him that this cold world had not forgotten about him.  That wherever his mother was, I was certain that she loved him and was, in some way, there with him.  I spoke of this with my nurse, who, as a mother herself, had similar feelings…but given her responsibilities was unable to assist him.

I do know that two of the three nights I heard him there was another nurse who took that place.  I could hear her speaking quietly to him in the hallway.  Encouraging him to return to his room.  Telling him that everything was going to be OK.  As I didn’t hear him again after they spoke, I believe she was successful.

I don’t know what happened to this man.  I do find some comfort in my belief that he will eventually be reunited with his Mommy.

Upon reflection, given the disdain I witnessed from the other people on the ward, I think that the ability to feel compassion might be limited for those who are unwilling or unable to put it in the context of a shared life experience.  I do understand that we were all on that ward for a reason, and we were in pain.  I shared and understood their pain.  But unlike them, I was able to put aside my pain and feel compassion for a fellow human.  For me – it was about thinking about my own children and how they would have felt if I was gone.  Given just days before it was a possibility that they would no longer have had me in their life, it struck me hard.  I also thought about how I’ll feel once my own mother moves into the next realm, and of my understanding of my husband’s pain that his mother is no longer with us.  I was able to put myself into his shoes and understand his feelings in the context of my own experiences as a mother and as a daughter.  The others in the room weren’t able to relate on that level, and as a result, felt annoyance rather than compassion.

Compassion is not about feeling pity for someone with less.  Compassion is about understanding someone else’s life through the window of your own experiences.  It’s about experiencing and relating to the pain and sharing some of the burden.  We are all human.  We should all be able to relate in some way to our fellow humans.  Compassion should be the link.

I encourage each of you to consider your own humanity the next time you are angered or annoyed by another.  Instead of stoking the anger or annoyance, soothe it.  Try to put yourself into the skin of the person who triggered the feeling.  Access your inner parent, child or sibling.  Think about how you would want your them to be treated in the same situation.