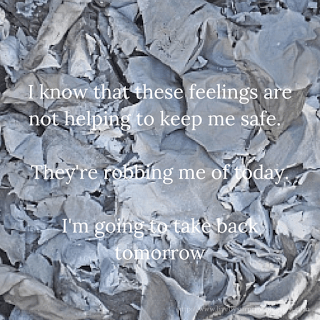 We finally got the car back after five-and-a-half weeks – a week ago.  I think I’d been handling it pretty well up to that point – I was driving again, not having too much as far as driving anxiety goes.

Hubs was very well meaning when he brought me in the bill for the repairs – which was all covered by insurance.  As it turns out, if our new car had been two years older, the insurance company likely would have called it a total loss instead of fixing it.

In my mind, the accident had been pretty much a non-event.  I’ve been having some light back pain since then (I think I tore something and am seeking treatment).  But that $18,000 bill broke something in me.  That $18K means that he hit me hard enough to almost total my car.

I had a little cry.  And I didn’t drive for the rest of the weekend.

Because where does it end?  Today I can’t back into a parking spot. Tomorrow I can’t turn left at a stoplight and I have to make my way home only using right hand turns.  The next day I’m afraid to go through a stop sign I there’s anyone at the other sides. Suddenly my life is ruled by things that I can’t do.

I know that it’s wrong.  I can’t be ruled by my anxiety. I can’t live my life like that.

So this weekend, I took that piece of paper that means so much – and I burned it in a pot in the backyard.

I know that these feelings are not helping to keep me safe.  They’re robbing me of today.

And I’m going to take back tomorrow.

2015-06-29
Previous Post: #1000Speak for Charleston, Ferguson and Paris…
Next Post: 40 Pieces of Advice for My Children on the Eve of My Fortieth Birthday