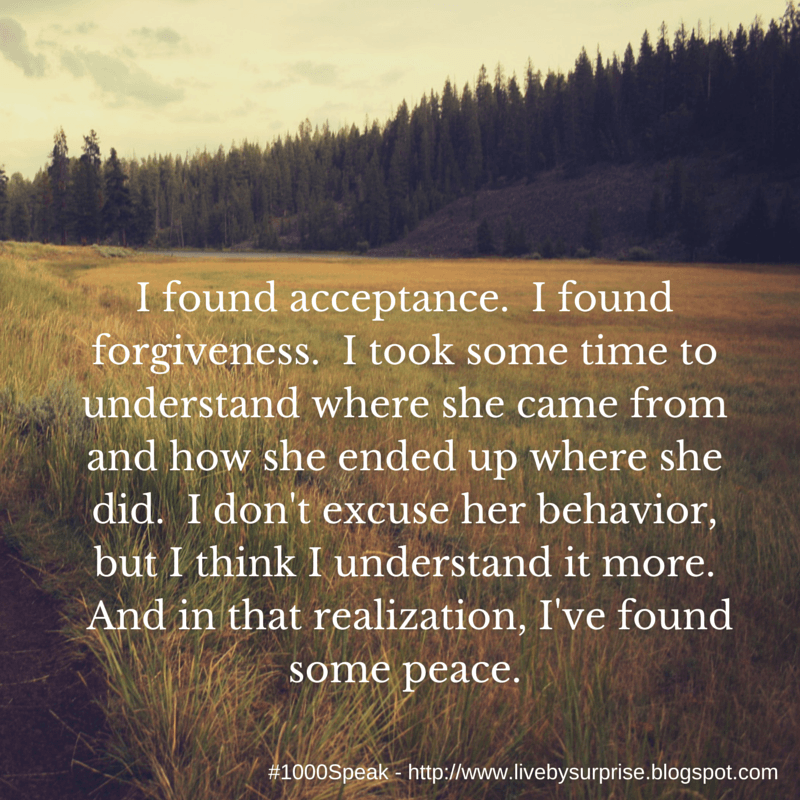 If you haven’t read about #1000Speak before, check out these posts…

If you have, then you may know that this month’s topic is acceptance.

This morning, I delved into my Gran’s diaries. More on that to come next Monday. But for today, I think digging through a couple of them has actually given me a bit of perspective. It’s shown me that I was not compassionate – and perhaps I needed to be.

I think my father had a reasonably uncomplicated life until just after he turned 14. He and his twin sister were mostly normal by all accounts. I suspect my father suffered a bit with learning difficulties, not unlike my Puck. He was insistent when he was young that he was born left-handed, but in those times, you weren’t allowed to be a leftie – and he was converted (forcefully) to the right. He and his sister filled the gaps in each others lives. She helped him with difficult things like putting on his clothing and tying his shoes. He spoke for the both of them.

When they turned 14, their father died from complications arising from a bout of appendicitis. He’d been ill for a bit, but didn’t go to the doctor. I wrote last week about the lasting effect it had on my father. He went to the doctor for every little thing. And his mother, after that, didn’t trust doctors.

I didn’t speak of my aunt, my father’s sister. His twin sister.

Truthfully, I didn’t know her that well. We saw her regularly when I was a child, at family parties on weekends about once a month or so. I remember her being larger than life. She always had a cigarette dangling from her mouth and a drink in her hand, and smelled of both liquor and cigarettes. Her voice was craggy, hard, with a constant, throaty cough from years of hard living.After her father died, she became a very difficult teenager, leaving my father for the most part to deal with his mother. She likely started drinking and smoking not too long after her father died. After graduating, she moved to Montreal, Canada and married my uncle, who was a bit older than her. He was a gruff man who had been married before and already had a child – that he refused to pay child support for. Their first born would be just over 50 now, she was a young mum.

Her youngest was born a couple of weeks after my sister, a full two years and a bit younger than me, and fourteen years younger than his older brother. As the youngest grew, I came to understand that he was a “problem child”. Auntie liked to party, sometimes just by herself – and didn’t let her pregnancy interfere. Cousin’s issues likely resulted from Fetal Alcohol Syndrome. He was a very difficult child. Stubborn. Violent. Angry. He didn’t do well in school and was expelled regularly for both talking back and fighting.

I know that I heard a lot, from my parents. Whispers. About the elephant in the room. The weekend family parties where Auntie and Uncle would drink heavily. Sometimes shout at each other and generally be nasty. And then…although this was in a time before MADD, they would drive home with their two children strapped into the back.

I’m sure that it must have been difficult for Auntie. Reading my grandmother’s diaries, I’m beginning to realize that she had a much closer relationship with my Gran than my dad did. I’m sure her father’s death was a very difficult thing to come to terms with. And I don’t know that she rightly did.

When my elder cousin was 18, we received a phone call in the middle of the night. It wasn’t the call that woke me – but my father was screaming and shouting and on his knees pounding on the floor. My mother was at a loss – she called for a family friend. I remember my father holding me so tight that it hurt. I cried. I didn’t know what was happening. My mother pried me away and put me back in bed. I don’t remember if I went back to sleep – but in the morning they told me that my cousin had died.No. Not that he’d died. That he’d taken his own life.

My father blamed Auntie and Uncle. My perspective has been colored by my father’s view – and I can’t say that it’s one that I don’t share. My cousin’s death was both tragic and preventable.

I think it’s likely that she also blamed herself. She drank more heavily after that. She and Uncle were together and apart. Damaging each other. Blaming each other. Forgetting about their youngest – who continued to be a problem. I lost track of him quite some time ago. I know that he had children young. That he beat their mother too. That she tried to break the chain of abuse and left him taking their two young girls. They’d be in their late teens now I think. He spent some time in prison, and last I heard was trying to reform himself. I hope he did.

And Auntie…well…she was lost too. Much like her mother and her brother, she withdrew from life. She somehow managed to keep her job. After about 15 years, punishing herself the whole time, she got cancer. She moved back in with my Gran…then into a hospice, where she died. I don’t think she was at peace even then.

Today though. Today – I found acceptance. I found forgiveness. I took some time to understand where she came from and how she ended up where she did. I don’t excuse her behavior, but I think I understand it more. And in that realization, I’ve found some peace.