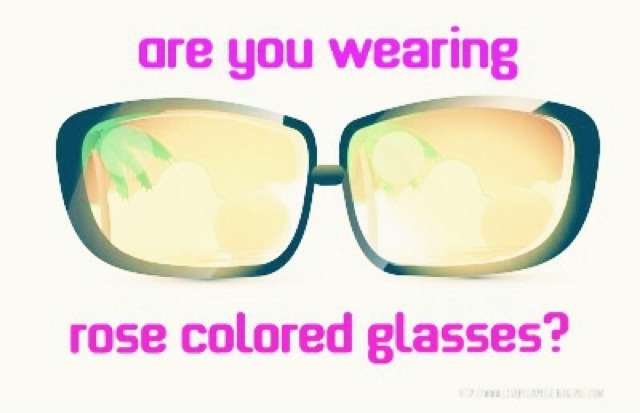 Years and experiences have taught me that if someone is wearing rose-colored glasses, they’re completely unaware of it.  It’s like one night while they were sleeping, someone slipped them on and they didn’t realize it when they woke up.  They just continued on with their life, not realizing that if they took off the glasses, not everything looks rosy any more.  No one can tell them that they’re wearing the glasses.  They have to realize they have them on and make a conscious decision to take them off.  It’s like Bruce Willis in the Sixth Sense.  The glasses show them only the world they’re willing to accept.

I had a girlfriend in high school.  She was dating a guy who was abusive.  Mostly just verbally, but sometimes physically as well.  But she didn’t see it.  We saw it.  She didn’t.  A couple of her friends (myself included) tried an intervention like approach.  We outright told her what an ass he was.  She never spoke to any of us again after that day. She did (thankfully) eventually break up with him.  But by that point, she was so damaged, she swore off men and never dated again.  And I lost my best friend.

I learned from that experience.  It cut me deeply. I hadn’t had enough relationship experience to fully understand why she took his side over mine (and her own), but I realized that I had done something somehow unforgivable.

When I was in college, a friend was going through an eerily similar situation.  Her beau was the jealous type.  He made her cut off her relationships with most of her friends.  Restricted where she could go with the remainder and when.  Controlled her every move.  It was one of her first relationships – and for some reason, she thought it was perfectly reasonable.  He loved her – why wouldn’t he want to spend all her time with her.  Why wouldn’t he want to protect her from outsiders.

I struggled with what to do this time.  I didn’t want to lose another friend. I tried writing an anonymous note to her mother (who was very close to me)…which for various reasons backfired and resulted in me actually sitting down with her mum and telling her what was going on and what my concerns were.  And spelling out as well what had happened in my previous experience.  My friend was still living at home – and thankfully with a little extra oversight on her parents part, she came to her senses and dumped his ass.  Without her ever even knowing that I was involved.  She’s moved on and married a wonderful man, who treats her like a queen.

It wasn’t too long after that when the day came that I put on my own rose colored specs.  They came on so gradually that I didn’t even realize they were there.  My ex, I eventually realized, treated me in a similar way to my friends relationships. But I didn’t see it.  With my glasses on, I thought he loved me.  Of course he wanted to spend all his time with me.  Sure there were times when I felt bad – but it was my fault.  I was the one to blame for his jealousy.  He convinced me that it was my job to ensure that he had no reason to feel jealous.  And I did.  I went to lengths to cut myself off from my friends and my family – all to spend my time with him and convince him that I was worthy of his “love”.

There were glimmers.  Like when the Matix glitched. My friends tried their best to get me to see.  But until I was willing to see it and the damage it was doing to me – I could not.  I wasn’t capable of it.

I’m lucky that eventually I came to my senses, but I have a much deeper understanding of damaging relationships now. I’m still very gun shy when I see friends of mine experiencing the rose colored glasses effect. As much as I want to shake sense into them, I realize that I would be in vain.

When the glitches appear – that’s the best time to quietly advocate for them. When they’re trying to process something that they might realize isn’t right. Sometimes it works, sometimes it doesn’t. Sometimes people have relationship after relationship, pausing only to change glasses in between.

If you’re reading this with your glasses on, you may not even know they’re on. I’m going to keep trying sweetie. I love you. And your worth so much more than this. I wish you could see the reflection of what I see in my own glasses. But you’ll never see it with those things on.

2015-07-02
Previous Post: 40 Pieces of Advice for My Children on the Eve of My Fortieth Birthday
Next Post: A Divorced Mothers Worry: Do My Children Need Therapy?