The Grandmother Diaries: I Opened the Box 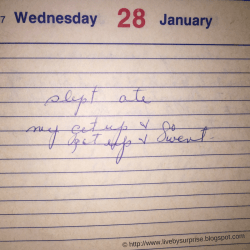 I finally jumped into Pandora’s box. I pulled out a handful of Gran’s journals today. I’m starting with 1987 – as it seems to be the earliest I found. Just the first page brings back memories. It’s yellow, curled a little and smells faintly of cigarettes. She lists the times of her favorite TV shows – Jack Benny, Hollywood Squares, Barney Miller, Lucy. I remember watching them with her, she on her green fuzzy swivel chair with the table and lamp beside it. A half chewed pencil, a crossword book and an overfilled ashtray. I sat on the brown shag carpet, watching with her and sniggering as she shouted her version of explosives at the screen during the game shows. (Her version because she was a lady. And ladies don’t use bad language.)She would have been retired for a few years by this point – spending her days doing crosswords, having lunch with her lady friends, watching TV and going bowling with the league. We spent a bit of time with her – we were older by this point and likely able to spend time on our own at home, but for the longer periods Gran’s was where we went.

First few days of January are interesting. She starts out each day with a description of the weather – cold, snow, sunny, wet. She talks often of talking to my aunt on the phone. Not so much with my father.

She went with my mother my sister and I to the mall on the tenth. “Girls loved my apple pie…one piece left.” God I miss her apple pie. Gran wasn’t the best cook. I didn’t like peas until I was an adult mostly because she used to cook the crap out of a can of peas and it always ended up having a strong metallic taste. But she could make a killer apple pie.

My aunt and her husband must have been on a break at the time – there’s mention of him visiting my aunt for dinner for New Years. The twelfth she suggests Auntie* is going to a wedding “I think Jan 31 – cousin* is going to stay with me.”

There’s no mention of my father until his birthday mid-January. Not even New Years. Even then it says she only talked to our machine.

She mentions feeling tired – and around the 20th says she’s been suffering with a cold. She even stopped smoking to try and kick it:

Friday 23 January – Cold sunny no cigarettes 3rd day. Don’t know what to do with my hands – still got very bad cold. Slept a bit.

She kept the non-smoking up for a while…the 27th she says “I didn’t smoke”.

Wednesday 28 January – slept ate. my get up and go got up and went.

Gran breaks down on the 29th “2 cigarettes” at the end of that day’s post. Likely because my aunt visited…Auntie smoked like a chimney and it was something they had in common. My cousin must have spent the weekend – my uncle picked him up and took him out. Appears they were still on their break.

Saturday 31 January – Sunny, snow melting. Watched TV at 3 AM. Watched until 6 o’clock. Up late. Had crazy dreams. Auntie* and Uncle* supposed to be going to wed(ding). Auntie* came at 8:30 at night to see if Uncle was here she was looped again. Said she was “drowning” herself. I nearly had a fit. Then after she left Uncle* called he just got back. I guess they passed one another.

In the notes for January:

I sure wish there was something I could say to Auntie* to change her around so she would see the harm she is doing to herself and everyone that loves her.

Sunday 1 February – Mild snow melting. Cousin played outside and made a snow fort. He sure is good. He has been no problem at all. I hope he’s changing. Will** came and took cousin and I to restaurant. Then we came home and Auntie came at 7 o’clock to pick him up. I gave her hell but it didn’t make too much difference. Point was she got there safe and sound and made it back today.

This makes me sad. My aunt was an alcoholic. In 1987, I was about 10 years old. The same age as my son is now. The elephant was often in the room at family parties. She drove. Drunk. Regularly. And sometimes with her children in the car. I knew it tore at my Gran, as it did my father.

(**Will was a friend of the family. We called him Uncle Will – he was a friend of my Grandfather and took care of Gran after he died. There relationship was (as far as I’m aware) completely platonic. He was an odd chap. Single as long as I can remember. Never married. Reminded me a bit of Winston Churchill. He may have been gay now that I think on it…must ask Mum).