#1000Speak – Listen to your Children with Compassion 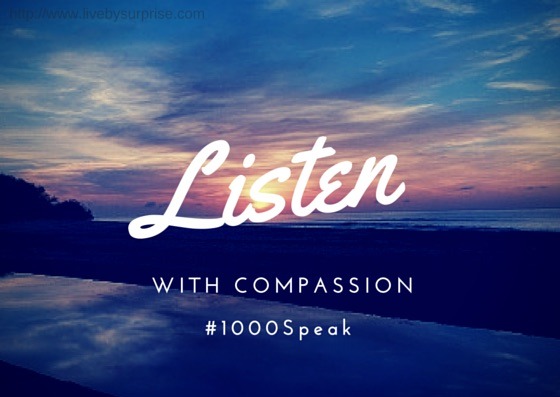 It’s such a simple word.

An anagram for silent. Which you should be while you’re listening.

But listening isn’t the same as hearing.

It’s not the same at all.

Listening, active listening, involves actually taking the time to digest what the other person is saying. It takes time. And sometimes, it involves compassion.

I find that as my children are getting older, it takes a lot more effort to listen to them. To understand what they’re saying. Minecraft, Pokemon, Angry Birds – things foreign to me. Things that I truly don’t really have an interest in.

But in order to have a real relationship with my children, I have to take the time to listen to them. To understand what zombie pigmen are. To walk around their world and see the “house” that they build. To get how many points this card or that one is worth. To see that slingshots involve angles and math and logical reasoning – and it’s all good.

Sometimes I just have to take that time to sit and listen. And maybe not understand. But actively listen. And ask questions. And be interested. And compassionate. When they lose a game or a card.

Even if it’s just not my thing.

So I listen. Because I’m lucky enough to have them speaking to me. And I hope that we never, ever get to the place where they think that isn’t important. Because it is.

2015-08-22
Previous Post: The Faces of Liv
Next Post: What’s that Spot? Business Attire for the Working Mom