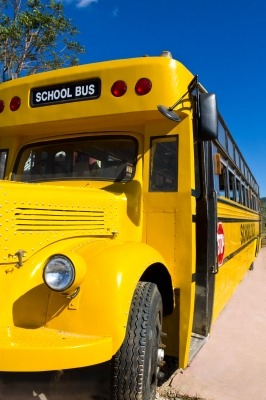 So my ex, the Goblin King (who is also apparently a huge drama queen), has sent me yet another entertaining e-mail.

A little back story – as Hubs and I both work outside the home, generally in the mornings we will drop them off at school before we head to work. However, as a convenience, I left them on the school bus list (a hangover from when I was on leave). Since my SIL has been visiting, about once a week, the children have been staying home later with her and taking the bus instead.

One morning two weeks ago, the bus didn’t show up. We’d already left for work. So the kids toddled their little selves back home (half a block), my SIL called me and asked me what to do. She’s been working out of our home, and had virtual meetings set up, and it would have been inconvenient of me to ask her to walk them over (she doesn’t have a car). It’s just over a mile to the school. We live in a middle class urban neighborhood with a low crime rate. The children have walked it a number of times, they know about road safety – and quite frankly, although it is convenient, we’re just on the border of the “walking zone”. They’re ten and almost eight years old. So I told them to walk themselves.

After I hung up, I called the school and reemed out the machine for not sending the bus. I waited twenty minutes and called again, to ensure that they’d made it safely. They did.

The problem of course was that it was exchange day. So I also had to let my ex know. At 8:41 (school starts at 8:15), after I ensured they had arrived, I emailed him and advised “FYI – the school bus did not turn up this morning. The children walked to school but were late arriving. I will be following up with the school.” This all happened on September 23rd.

Only 45 minutes after I sent my e-mail I received:

Who’s fault is it that the children had too walk to school? You are responsible for the children, this includes drop off. ‎Did they have adult supervision? Puck is 10 and Flower is 7. Who indicated you that the children were late? I will be discussing this with the school also.

Note: Yes – this is verbatim. Yes, as a writer, it hurts to read it. My apologies.

As it was pretty clear in my e-mail that the bus didn’t turn up (not my fault), and I indicated I’d be following up with the school, I didn’t respond.

On September 25, in his exchange e-mail I got:

I will have more to add later, concerning the bus incident.

I will be addressing the topic of busses tomorrow by email. As you went past your mandate, as this fell under my Jurisdiction. Yes if you where late, or your agent was late, I wouldn’t have a problem with that. But this was not the case.

My “agent” is Hubs, who GK refuses to call by name or acknowledge I’m married to.  So apparently if we’re late, that’s ok, but if the bus driver doesn’t show up, that’s not ok, and all my fault.

So I waited with baited breath for his next e-mail on September 30th, which (surprise) didn’t mention the bus at all. Nothing on October 5th either. By which point, I was of course on the edge of my seat. On October 7th (a full two weeks after what we’re now calling School-Bus-Gate, I got his e-mail – which was attached to a police alert that had been sent to all parents from the school board. The alert was related to a man who had spoken to and made a few high school girls comfortable in a neighborhood several miles away from ours on September 29th. It also included some safety tips. GK’s e-mail said:

Let me be clear I have a problem with the way you are presently handling the children during Morning delivery to school.

Fascinating, except I suspect you’re about to contradict that statement…

As was especially the case when the bus failed too show up. I understand from the school, and the children that they where stranded at the bus stop, of the morning in question as the bus didn’t show.

They did walk back to your place, and told by your live in Sister in law too walk to School.

OK…not sure what you’re implying about my sister-in-law…but guessing that’s OK, since in your mind I’m not married to Hubs? And no…she didn’t make that call. I did.

Another point of contention, is the fact that this did happen on my custody day, under my time. I could have picked them up and taken them to school. I was not informed of the full facts, by you? This is part of the reasons why, I feel we need to continue with Mediation. Yes I do have a problem with you having a 10 Year Old and 7 Year Old Wondering around after School is in. You are very fortunate nothing did happen, and so are the rest of us. Your actions affect us all, don’t forget this.

In the mean time I suggest you don’t let this happen again. As I will be closely monitoring any future developments concerning this issue.

Followed, an hour later with:

I would like too note that the children informed me, that Your Sister law did call you at work to inform you of the bus not arriving. They did say that you said over the phone too let them walk? So all in all, this does fall squarely on your shoulders. These concerns should be addressed.

Really, I can barely hear him over the whirring of his helicopter blades. Poor snowflakes.

From his e-mails, I have gleaned:

All this to say I am so glad that I don’t get sucked into this stuff any more. I’m glad I don’t have to attend meetings with a parenting coordinator to listen to the Goblin King drone on about his issues, and have the coordinator remind him that we parent differently and we each have to accept that as long as the children aren’t in any real danger, we have to let it go. I’ve heard her give that speech on so many occasions, I could probably recite it from memory.

In the end, if I respond at all, my response will be my usual – if you think that I or anyone else is caring for the children in a way that puts them in danger, I would encourage you to inform the appropriate authorities. Risky, perhaps. But in the end, I can logically explain to a child welfare worker my actions and expect that they’ll understand. As much as I’d like for him to understand that I ‘m driving this bus, if I explained it to him, I’d just be wasting my breath. Because he is the Goblin King.