Allowance: How To Teach Your Children To Save Their Money 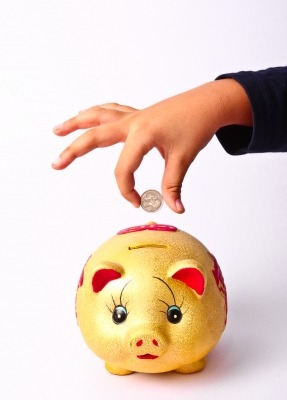 Given the issues in my first marriage with money (and my ex’s continuing issues managing his), I’ve been trying teach my children how to manage money with an allowance. We’ve come across some obstacles. The children seem to think that a “bank card” means an endless stream of magically replenishing money. They don’t equate it with the reason Mom and Stepdad are out of the house 40 hours a week. As well, both of my older children have no qualms with spending their money on whatever shiny little object they fancy. It’s less about the object itself than the ability to spend the money in their pocket.

We’ve tried an allowance before with the following goals in mind:

Our original allowance scheme hit a few snags. The children completed chores and I gave them money for completion once a week, deducting for chores that weren’t complete. The money was split into three banks – one for spending, one for sharing, one for saving. The sharing fund was to be sent to a local charity – but we didn’t have a set way of doing that. The saving fund was to be put in their 529 plan. The spending one was to allow them to save a portion for the bigger ticket items, but still have some pocket change.

Where it Fell Down

We had a lot of trouble with implementation for several reasons:

Eventually, it just kind of fell apart. The kids still did some of their “chores”, but not all of them. I gave them their allowance on an as needed basis (when I had cash).

With the new school year starting, we’ve decided to try it again. This time, we’re taking the learnings from the last time and making some changes.

The children have already indicated that they’d like their allowance money to go to animals. Our first charity share will be with a local helping animals training facility. I will be calling them to ask for a tour so they can see what use their money will be put to.

We’ll see how it works anyway. Our first family allowance meeting is set for the first week of January – I’ll report back then.

What about you? Do you have an allowance system for your children? What’s working for you?