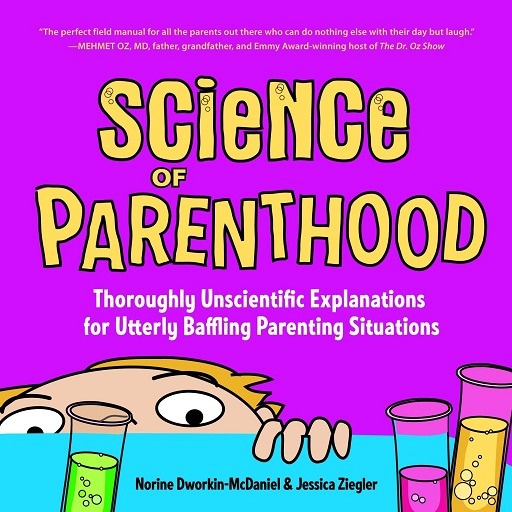 I usually don’t spout scientific theory…but I was recently asked to do a review of “The Science of Parenthood” by Jessica Ziegler and Norine Dworkin-McDaniel, and as a result, have come up with my own theory of parenthood.  I am qualified to espouse this theory – because a) I have a Bachelor’s degree in Social Science and b) I am a mother of THREE children.

The Negative Correlation Theory of Parenthood

My own personal experience (and anecdotal experience from friends and relatives) supports my supposition:  there is an inverse relationship between the increase in the number of children you have and a proportional decrease in the amount of “stuff” (yes, that’s a scientific term) that you need for them.

With Puck, (Baby #1), for every trip, even to the grocery store, I always had:

When Flower was born, for (mostly) every trip, even to the grocery store, I always had:

Notice – the list has decreased in length by about 1/3.

By the time Bae was born, we had:

Note that again, the list has again decreased proportionally by about 1/3.

Now Bae is two and still in diapers, but we’ve actually gone out with me forgetting to bring extra (I’ve since packed an emergency one in the car – cause that’s not happening again…). He usually has one of his die cast cars and can eat fast food – so I’m happily back to a “normal” sized purse. And sometimes we even just go out with my phone and my keys (the cover has my drivers license and credit card in it).

Unfortunately, I won’t be able to confirm my theory with child number four due because we “fixed” that issue.  I suspect if that did happen though, I’d just strap him or her to my back and (maybe) throw an extra diaper in my pocket.  To further confirm my theory – I invite you to provide anecdotal evidence in the comments below – how much stuff did you bring with each subsequent child?

The Science of Parenthood

The inverse relationship between the number of kids and the amount of kids stuff you carry might be my own theory, but you can find similar scientific and mathematical concepts in the book “The Science of Parenthood” – a hilarious book by co-authors Norine Dworkin-McDaniel and Jessica Ziegler.  The book drills deep into the core sciences to explain everything parenthood from pregnancy to birth, toddler to teen including:

If you’re looking for a baby shower gift or birth control for your younger sister – this book is your ticket!  See the link below to purchase on Amazon or find more information on Facebook, Instagram and Twitter!