Some Things Cannot Be Forgiven #1000Speak 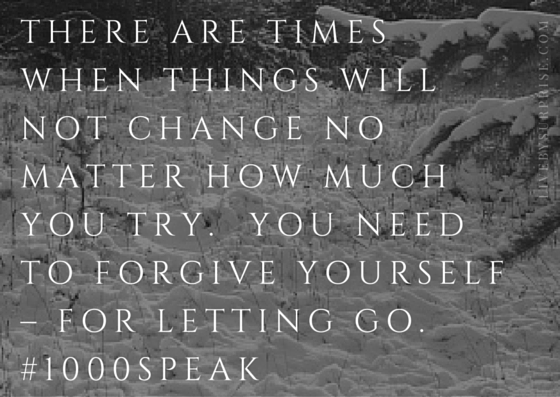 The theme for this month’s #1000Speak post is one that I feel completely unqualified to write about.  Forgiveness.

It’s not something I write about often (or that I’ve ever written about here at length), but the reason I feel unqualified is because I believe that there are, sometimes, things that you just can’t forgive or forget.

My parent’s divorce was complicated by my father’s bitterness.  He is a passionate person, and could not forgive my mother for not “trying”, in the same way my ex is unable to get over the fact that I left.  The truth is, in both cases, my mother and I tried as hard as we could for longer than we should have.  We both gave of ourselves to men that took and took and took, and never returned.  The end of both of our relationships with our husbands was inevitable.  And, similarly, the amount of conflict that followed our breakups was also inevitable.

I had been very close to my father when I was a child.  He was, for the most part, a good father.  He encouraged my creativity.  He made opportunities for us to learn and grow and discover the world.  As happens in some families, when my sister was born, he took over primarily for my care.  As my mother bonded with my sister, he took on bonding with me.  We had a similar mindset.  We laughed at the same jokes.  We both had a creative flair.

I’m sure I had seen elements of his bitterness prior to my parent’s split when I was fourteen.  I don’t know how aware of it I was at the time.  I was just starting to come out of my cocoon.  Emerging to find out who I was going to be.  Testing my wings so that eventually I could leave the nest.  And, as most teenagers tend to be, I was focussed on myself.

Despite my parent’s divorce, I did try to have a relationship with my father after his divorce.  My sister, perhaps wiser than me at the time, quickly refused to continue her exposure to the bitterness that flavored our every interaction with him.  Each visit was tainted.  He spewed his bitterness of our mother.  Burdened us with his issues.  He was unable to let go and climb out – eventually finding a woman who was similarly “afflicted” by her divorce so they could live out their bitter lives together.

He also made it clear to both of us that he was focused on me – to the exclusion of my sister.  He thought that since they had two children, I should come live with him, and my sister would stay with my mother, and wouldn’t that be perfect.  My mother refused.  She knew that if we had any hope of a relationship that my sister and I needed to grow up together.  Still – it had it’s effect.  My sister and pay lip service to our relationship – but given time and distance, it really doesn’t exist beyond a couple visits a year.

With my father though, at the time, I pushed for more contact.  I was the chosen one.  He needed me.  I would help him through it.

He was late, forgot my birthday, more than once didn’t even show up.  He drank.  And drove.  And lied.

I forgave.  I tried harder.  I involved him.  Invited him.  Almost begged to have him in my life.

I did realize eventually that he was beyond help.  It wasn’t fixable.  I couldn’t make him be what I needed any more than I could be what he needed. I cut off contact just as I started my relationship with my husband – ironically starting the same cycle all over again – trying to fix something in my husband that I hadn’t been able to fix in my father.

In our thirties, my sister reached out to my father as my Gran got sick.  She has reached her own forgiveness, settled for herself something that I am both unable and unwilling to do.  She spends time with him, not a lot – and he’s still abusive – but she feels the need to let her children know him.

I don’t feel the same need.  Even as I write this I feel no emotion.  I’m just done.  I’ve outgrown it.  And even twenty years since we last spoke – I can’t see myself changing my mind.  There are some things that just can’t be forgiven.

I don’t know how much of a #1000Speak post this was.  But there it is.  My feelings on forgiveness – are forgiving myself for giving up.  There are times when things will not change no matter how much you try.  And I think you need to forgive yourself – for letting those poisonous relationships go before they consume you.

000 Speak is an international blogging movement to add compassion to the world. Every month on the 20th, each blogger who contributes has a different take on the month’s theme.  January’s theme is forgiveness.