Memories or Evidence? Photos and Divorce 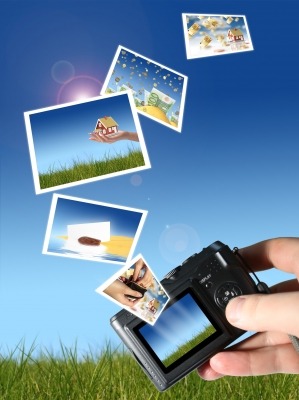 Over Christmas vacation, Hubs and I started to sort through some of the stuff in the basement.  When we moved into our house, we’d weeded through a lot of our stuff and probably sent a truckful to the dump (or charity).  But there were still things that we’d put into boxes to sort through later.

While sorting through a box, Hubs pulled out a black and white photo…asking who was in it.  It was an engagement photo of me…with my ex.  Obviously, I was a (cough, cough) few pounds lighter…as was my ex…and Hubs must have thought I didn’t have any pics any more.  In that same box though is a pic of my family prior to my own parent’s divorce.

Obviously, I don’t display either of those pics in my home.  I’m not particularly attached to the pic of my ex, and would happily cut him out of the picture – but, quite frankly, I look fantastic and I’m reluctant to get rid of it.  My wedding album is down there in a box somewhere too.

I haven’t kept them because I’m “stuck” in the past.  I’m well over my ex, and happy about my divorce – and if I hadn’t stumbled across them, wouldn’t have thought about them at all.

See…the thing is…while I’m not that woman any more – either physically or mentally – I’m not willing to let her go.  Although I was with my ex for over ten years and he was very emotionally abusive – I don’t want to erase all of those memories.  Despite the bad memories – there were some good times.  I got to see parts of the world I hadn’t experienced before.  I met new people.   I had two amazing children. I built on what I was and I grew into the woman that I am today.   Some of those pictures make me smile.

When I was about fifteen, after my parents split, my father’s storage locker was broken into.  He didn’t have anything of actual value in there, but for some reason, the thief made away with hundreds of slides – photos that represented a good chunk of my childhood.  (For my younger readers…a slide was a transparent photo which you had to put into a machine in order to display it on the wall using a projector – like an old school PowerPoint presentation).  The slides were never recovered.  And I have since grieved the loss of the evidence of those memories.

As a result, I’m moved to keep the photos as a record of my history as much as I’m using this blog as a record of my life.  I want to be able to look back at what I was – and be proud of what I’ve become.  I also want my children to be able to look through the pictures and see what their mother was like when she was younger.  Whether my ex is in the photo or not – I want them to have visual evidence that they are loved by both of your parents.

I could, if I wanted, go through the pictures and remove the ones of my ex only.  We were together in the age before selfies. I think our honeymoon photos contain only two of us together. In truth, I’m not particularly inclined to look at them so thoroughly.  I’m comfortable knowing that they’re there if I want to look at them.

I also haven’t taken the time to go through them with my children.  The thing about photos – they’re just moments in time.  A picture of someone smiling in that moment could have been crying or angry or shouting shortly after.  They’re distorted.  And my children are young enough that they’re still asking the question “why?” – I don’t want happy photos to feed into their confusion about why their parents aren’t together.

I’m lucky that when the pictures were taken “social media” was in it’s infancy.  I don’t have to worry about being confronted by the memory when I don’t want to see it.  They’re down in the boxes and that’s where they’ll stay.  For me to look at when and if I ever want to.  Or if I want to share them with my children.  Because my past is theirs too.

Tell me – what did you do with pics of your ex?  Are you keeping those memories or have you wiped them away?  Is it harder in the age of social media to escape them?  What about your kids?  And finally…did you know what a slide was?  Or am I just a dinosaur?