Chinese Fortunes and Being Aware of Your Fears… 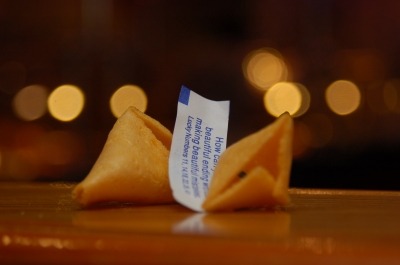 We had Chinese food the other night.  I don’t generally take stock in Chinese mystisism as touted by a badly made cookie, but as I shared with the children, I pulled a fortune that had a deeper meaning.

Being Aware of Your Fears Will Improve Your Life

I had a dream the night before.  In the dream, I was moving into a new apartment with my aunt and my cousin.  And my ex.  It suddenly dawned on me (in the dream) that he’d been my ex for a long time – and for very good reason.  And yet I felt bound to stay in the new apartment.  I was on my knees in the center of the biggest room.  Alone.  Crying.  Pounding the floor and asking myself why I’d done it again. And then I woke up with a start.

I know what brought this dream on.  That evening, my husband and I had a discussion about our new bathroom.  We’d been back and forth during the day as we needed to pick out a new sink – and I was reluctant to make the decision on my own. I sent him a sink I liked, he said it was ok – and I purchased it on the way home.

When I got home and showed him, he told me that I’d picked the wrong one – it was too small. He was a bit terse – as it meant another trip to the store.  I felt blamed. We didn’t argue – but our discussion was tense. And it brought it all back for me. The tightening in the chest. The urge to leave.

Truly, I hadn’t done anything wrong. But in the place I was coming from, it felt wrong. It felt like I’d wronged my husband and we were going to have an argument. I couldn’t breathe at the thought. The dream was my fears coming to reality. I skipped dinner and went to our room, withdrawing from the conversation.

It’s a hold over from my first marriage.  I couldn’t bring anything new into the house without his approval.  If I did, he’d yell me, cause a fight about something else, or make me take it back, or wouldn’t speak to me.  Even sometimes if he’d agreed to it – if he didn’t like it when it arrived, it was my fault. That cloud that hovered over everything. It was all about power and control. He had to be in control. There was no way to appease him. Being complacent annoyed him. Arguing made it worse. So I would generally just withdraw and wait until he moved onto the next thing. That was my whole first marriage. Tense. And under a cloud.

With this argument, instead of licking my wounds, I faced my fear. When Hubs came up to bed, I took a deep breath and started a discussion. I explained to Hubs that I’d sent him a link to the sink I liked so he could make sure it would work. I don’t do hardware. I didn’t know what size the sink was. I assumed when he said it was OK, that he’d looked at it and ensured that the size was right.

I apologized. He apologized. We agreed it was a misunderstanding. And we let it go. And it was a great relief. Instead of avoiding and going into a holding pattern – instead of a cloud of avoidance or passive aggressive behavior – we discussed it and let it go. We agreed that next time we’d be more cognizant of each other’s deficits. And we will.

I know it’s something I’ll still have to work on. And I’m still afraid that I will throw a monkey wrench into my marriage because I’m afraid of it ending up like my first. I am afraid that my first instinct may always be to withdraw. But if I can face those fears – and confront them.  If I can engage instead of withdrawing, I’m on my way to addressing those fears, and hopefully, moving past them.