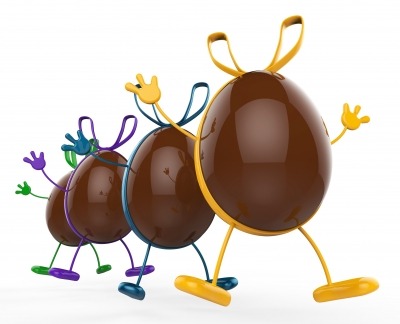 Happy Zombie Chesus Day! (Sorry if this offends you – I am a lapsed Catholic and have the utmost respect for whatever beliefs you may or may not have – but would point out that the dude rose from the dead according to the story…so…zombie).

Anyhoo…the last few days have been…fun. As they tend to be in my house around the holidays. Because (of course) of the Goblin King.

Hubs volunteered to pick the kids up from Grouchland on Friday – I’ve recently started an online course and wanted an hour or so to catch up before the kids got home. Lucky I did too – because as it turns out, the Goblin King intended to ask me something – in front of the children. No, he’s not supposed to do that and yes, he should know that all communication should be in writing.  He has enough disdain for Hubs to know not to try and pass a message, but the kids told Hubs what the likely message was in the car. Apparently the Goblin King had decided that he’d like to have the children for Easter. And he likely thought that ambushing me in front of the kids would get him his intended result.

Before you ask – yes we do have a specific holiday agreement that covers Easter. The children are in a Christian school and as a result get both Good Friday and Easter Monday off.  We take them according to our regular custody schedule – which means one of us gets them Good Friday through Easter Sunday, and the other gets them on Easter Monday. I hadn’t really thought about it, but for the last few years, I’m pretty sure I’ve had Monday. Apparently this didn’t strike the Goblin King until Friday either (mostly because he couldn’t plan his way out of a paper bag).

Of course, as I said, we have a specific holiday agreement that covers Easter. And of course, we agreed with the parenting coordinator that all scheduling change requests would happen at least two weeks in advance. So of course, the Goblin King remembers NONE OF THESE THINGS. Because he has suddenly realized that Bunnicula is visiting on Sunday, so he must have the kids. Which is no problem because why would I have made any plans to celebrate with my own family? My sole purpose in life is to bend to his will.

For the record, even though I’m lapsed and Hubs identifies as an atheist, we still worship both the chocolate leaving bunny and his present leaving red suited winter counterpart. I wholeheartedly believe in the Easter bunny (because if zombie Chesus can make water out of wine and come back from the dead, believing a little bunny magically delivers chocolate is should be easy for anyone to believe, right?).

Here, I should mention that I finally got a date out of the parenting coordinator on Wednesday. (Long story – but it took over a month). I sent the date to the Goblin King on Wednesday morning and asked for a swift response so if the date wasn’t good for him (and it should be, he’s not working that day), we could reschedule before the holiday weekend. I texted on Thursday to remind him I was waiting.

He did finally respond in his Friday email that he couldn’t go because he had “work stuff” (which is code for “I’m being an asshole so I can show you who is really in control.”)

And, as expected, his email ended with “Also, the children would like to see me on easter Sunday. Exchange.” (ibid)

Of course, he won’t let it go and five hours later I get another email:

I would like conformation (sic) about Easter Sunday, as I would be available sometime during the day. They are interested in what the bunny has brought them. This would be a holiday schedule change. 3 or 4 hours would work upon retuning back to your place.

As we haven’t celebrated on Sunday for a few years because of the custody schedule, we’ve been celebrating on Monday until this year. The kids have never been upset about it, I’ve clearly never had an issue with it – the only one who thinks this may be an issue?  The Goblin King. Likely because the only time that really matters on the custody schedule is the time when the children are with him.

Note that his very Catholic concern is not about the children not going to church on Easter Sunday. He’s worried that someone is going to eat the magic bunny’s chocolate before the kids get there.

Since I was writing an email anyway, I also took some time to respond to his suggestion that he had “work stuff” and would be too busy to attend the PC. I noted my disappointment that he did not think this should take priority – especially given it was his suggestion and it isn’t a day he’s working. I told him that I had already asked for time out of my actual work day to attend. Despite my better judgement. Given the last time we attended we agreed to a whole list of things including the holiday schedule. Which covered Easter. And required two weeks notice before changing the schedule. AND HE STILL PULLS THIS BULLSHIT EVERY SINGLE TIME.  SO FUCK IT THEN. NO PARENTING COORDINATOR. AND BTW NO. YOU CAN’T FUCKING HAVE THE CHILDREN FOR EASTER.

OK. I didn’t say it precisely like that. But that was the general message. Without the swear words. I calmly and patiently explained using small words.

Which of course were not small enough – because I got a text Saturday afternoon:

What is happening in regards to a short exchange for Easter Sunday tomorrow? I would think 3 too  (sic) 4 hours would work? I know the Children would want this. Don’t be rude please answer my request on the childrens behalf. I will be responding to your ridiculous email, yesterday.

So I went back and reread my email because maybe, even though I was careful to use small words and went over it at least three times (and had Hubs read it too), maybe it wasn’t clear?

But no, my email said:

My answer is no – you will have the children on Easter Monday as we agreed.

Although I was tempted to respond “were the words not small enough?” – I restrained myself and did not respond.  Because I have already answered.  And I’m not getting drawn into his bullshit any more than I already have.

The good thing about this is I’ve also decided (again) that the whole parenting coordinator thing is a complete waste of my time. He will never get it. We could go in for a refresher once a week and he’ll still pull this shit.  I’ll see if I can manage it on my own for a bit – but eventually I’m going to have to get a court order affirming everything we agreed with the PC. Because until it’s locked down (and likely even after), this stuff will still happen.

Only ten more years though. Almost half way. And it will get better when the kids are teens, right?

Either way – if you are celebrating – Happy Easter. I hope that the bunny has brought you much chocolate that zombie Chesus doesn’t eat your brains. And if you aren’t celebrating – I still wish you a very happy, Goblin King free day.