What Happens When A Writer’s Son Can’t Read? 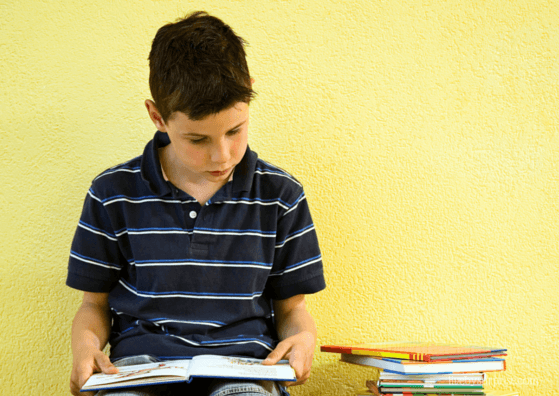 As they pulled my son from the fresh slice in my abdomen, he had a bluish tinge.  He was not crying.  Up to that point, I hadn’t spoken his name aloud: it was a secret that only he and I knew.

“Why isn’t Puck crying?” I croaked, touching the nurse’s hand to get her attention as she and I watched a huddle of nurses and doctors surround him on the other side of the room. Within  moments, a sharp peal from Puck dispersed them and he was finally brought to me.  I counted fingers and toes and got lost in his big blue eyes.  I barely noticed as they stitched me back together. His fingers curled around mine as I inhaled his tuft of light-colored hair and let out a long sigh. He was going to be OK.

I watched him grow: he was a normal little boy, hitting each of the toddler milestones in turn. He got a mouthful of teeth. He started talking and walking before he was one.  He was potty trained at two.  He was social at the day care, making friends easily. He enjoyed singing, and my car radio was taken over with the music of Sesame Street and The Wiggles. He loved story time and we read together every night, spending weekend afternoons at the library.  I was thrilled to discover at two and a half he could sing the whole alphabet and count to ten. He was even a little mischievous: I’d often find him after bedtime playing under his blanket.

As he entered school, I expected he would excel, but was dismayed as I had my first meetings with his teachers.  They told me that Puck was acting out in class.  Although he appeared to enjoy science, music and even math, and tested well verbally, he was not interested in writing or reading.

We soon discovered that Puck’s sing-song alphabet was only that – a song.  His mind couldn’t match the sounds to written letters.  His fingers wouldn’t translate the letters to paper. Puck’s writing samples showed letters that were misshapen: too big or too small, often backwards.  He was acting out in frustration.  He couldn’t do the same things that his peers were doing.

[tweetthis]We soon discovered that my son’s sing-song alphabet was only that – a song. #dysgraphia[/tweetthis]

Puck would cry and throw things during homework.  He didn’t want to go to school.  My normally even-tempered,  well-liked boy was telling me that he hated all of his teachers and that he had no friends.  As we read together at bedtime, he stubbornly refused to attempt to identify the letters or try even the smallest words.

At school, with one teacher for over twenty students, Puck was falling behind his peers.  We pushed for testing, but after discovering the snarl of wait lists and issues with funding, decided to test privately.  After several intense weeks, we received a diagnosis.  Dysgraphia – a disorder of writing. It was a relief to have a name for it.  It would take effort, but we were told that with discipline and accommodation, he could read.

The school had an occupational therapist work with Puck once a week.  We engaged a private tutor and started physical therapy to increase his core strength.  As a result of the thorough testing, we had a specific IEP put in place and regular meetings with the school.  His written output was decreased, as they focused on ways to get him not only to learn – but to enjoy school.

At home, we worked hard.  If Puck got frustrated, we’d switch tasks. We struggled to build his confidence. Puck practiced his writing intently – gripping his pencil tight in his fingers to try to perfect the letters.  We started teaching him how to type and the school allowed him to start completing assignments using technology for any written output.

Once he conquered the alphabet, Puck started reading smaller words, while I read the big ones.  With encouragement, he advanced to small books intended for younger readers.  As he gained confidence, the books grew in size and complexity. Yet, reading continued to be a chore for him.  It was always more work than fun. I fretted. What if he didn’t develop a love of reading?  How could he not love books?

Then one morning, a full three years after his diagnosis, he came downstairs with dark circles under his eyes.  I went up to his room, ready to punish him, expecting that I would find Legos under his pillow.  I pulled back his blanket.  No Legos.  Instead, I found a flashlight and a colorful, thick, dog-eared book with a bookmark in the middle. I picked up his pillow and hugged it, sniffing the essence of his now darker blonde hair as I let out a long sigh.  He’s going to be OK.