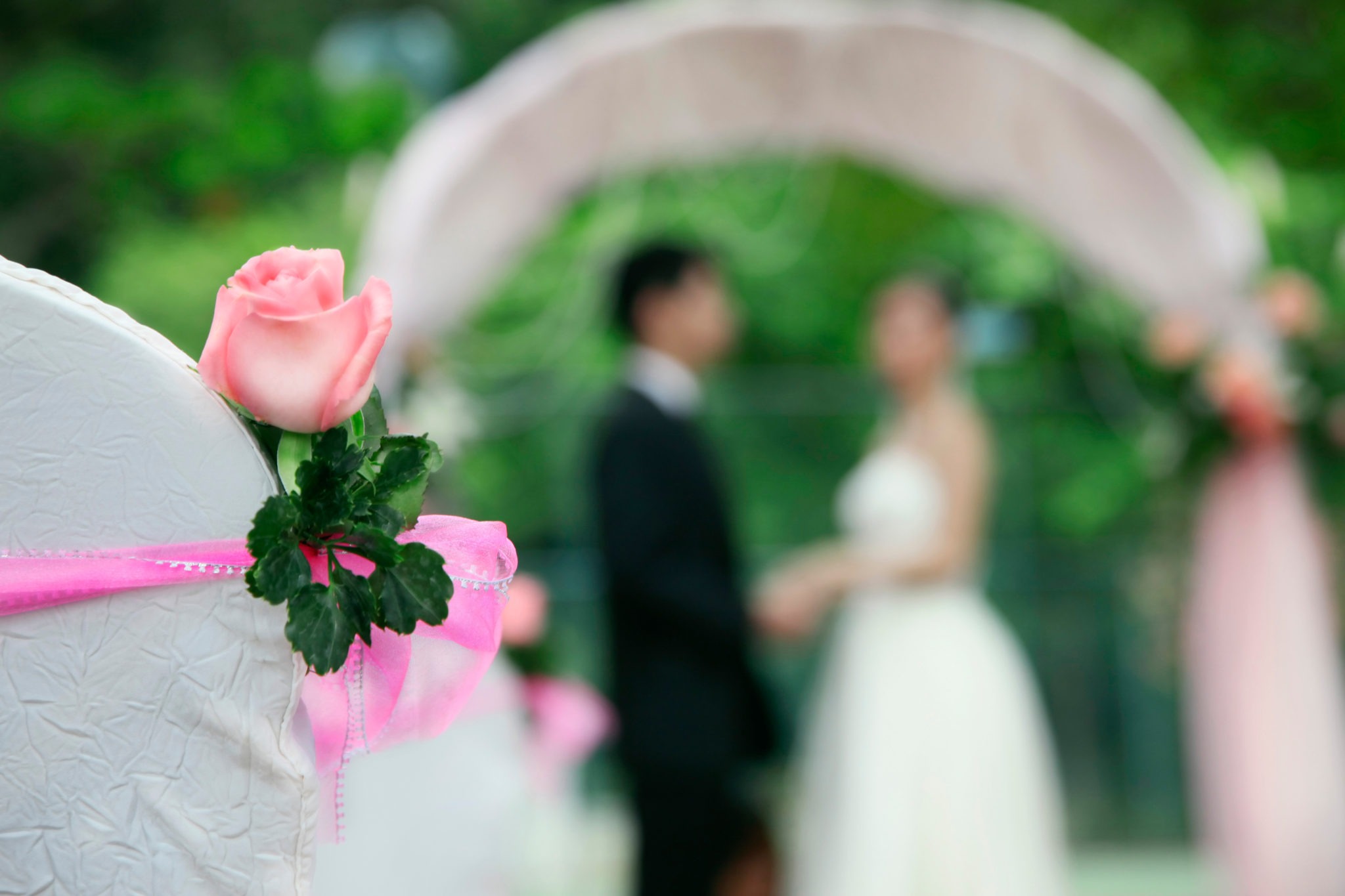 I’m not one to rush into things, but once Hubs and I decided to get married, neither of us thought that there was any reason to wait. We’d been spending all our time together prior to the accident, and after, he moved in and took care of me. It wasn’t the ideal way to for him to move in, but it forced us to take a hard look at where we were, and whether it could work long term.

Our ceremony was held in a castle that had been converted into a restaurant. The property was right on a lake with a garden down to the beach. Although we married in mid-March, the weather was unseasonably warm and we were even able to get a couple of pictures outside.

We’d known each other for three years, but as we’d only been dating for four months, we weren’t very familiar with each other’s family. Although my mom knew Hubs (as we’d all worked together), and he’d met my youngest sister, my stepfather and my grandmother, he hadn’t met my other sister and her family at all. Our wedding was only the second time I met his brother’s family. My children had not met them yet.

My mother, sisters, niece, Flower and I spent the morning at the salon getting our hair put up. The hairstylist told my daughter she was a Queen. That must have made her feel very regal because she introduced herself to my husband’s nephew as “Queen Daphne” (Daphne being her favorite Scooby Doo character) and put out her hand for him to kiss (to his credit, he was all of 17 at the time, he did).

I suspect Hubs’ family might have been a little wary. His last long-term relationship hadn’t worked out very well, and they weren’t a big fan of his ex. Having only met me one time, I’m sure they were wondering what the rush was. Perhaps they were concerned that he was taking me on because he felt guilty about the accident. My mother initially had reservations as well (I remember that conversation vividly). After all, this was a man that we both worked with. If it went wrong, it could potentially affect all of our careers.

But on that day, none of those things mattered. We’d made some plans: we’d ensured the room at the restaurant was booked, we had an officiant and asked someone we worked with to do photographs. But overall, the day was fairly unplanned. After the girls and I had our hair done, we went home and Flower had a rest on the couch on Hubs’ chest while I got into my gown.

The restaurant had a lovely entranceway with a large staircase. We took a few photos there. I’ve got a lovely one of us and the kids near a window on the second floor. Once we’d done the initial photos (and a few introductions), the children and I waited on the staircase while my sister’s husband cued up the music on Hubs’ iPod. Feeling brave, I gave my sister my cane as I passed through the door and held tightly to my children’s hands as they walked me down the aisle. As we got to the front, the kids handed me to Hubs and went to sit with my mother. I’d seen him smile before, but his smile that day brought tears to my eyes.

We said our vows inside an alcove full of stained glass windows which opened into a room with walls lined with decorative dark wood paneling. The floors were covered with oriental carpets. My husband took my hands and lightly but steadily helped me stay standing as we faced the officiant.

My husband was very cognizant of the fact that he wasn’t just marrying me. He was becoming a father to my children. His vows reflected not only his acceptance but his eagerness to take on the role, just as mine welcomed him into our family. We were both wiping away tears as we exchanged our rings.

[tweetthis]He was becoming a father to my children. His vows reflected his eagerness to take on the role.[/tweetthis]

After a very deep first kiss, I felt a tug on the side of my dress. As I leaned down to my daughter, she exclaimed, “I have to POOP!” which drew a hearty laugh from my husband, and chuckles from our family. I gave her a quick hug and my mom rushed Flower to the washroom. Somebody brought me my cane, and we all went into the bar so the staff could set the room for dinner.

We didn’t have a special menu, allowing our guests to choose from the variety of gourmet offerings the restaurant had to offer. The wine flowed freely. And as we finished the second course, the lights went out. There was still enough daylight streaming through the stained glass windows to see, and the staff sprung into action as if the blackout was planned. The candles they brought out made the dinner more romantic and intimate. And when the lights came back on, we asked to turn them off and continue by candle light.

It’s been almost six years since that day, and I can still picture it in my head. Our wedding didn’t have  fancy invitations, decorations or bonbonniere. There was no wedding registry—we didn’t need gifts. Our gift was sharing that day with our closest family and friends. It was calm and relaxed. We just had a good, relaxing day together. We spent that night in a hotel about an hour away, and then came back and took the kids up north to Hubs’ house for a week, to spend some time together as a new family.

2017-03-06
Previous Post: Finite Disappointment and Infinite Hope
Next Post: Back to School, An Early Education: A Short Fiction