I Just Wanted to Leave… 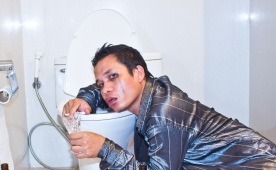 I was sick.  So sick.  I didn’t even want to tell him I was pregnant.  I just wanted to leave.  I’d made so many plans…and now I was stuck.  I couldn’t care for my little boy on my own.  I could barely care for myself.  Even so, I was fiercely in love with this new baby.  And I knew I couldn’t bring her into this.

I’d known for about six weeks when he came in on me throwing up.  Again.  The morning sickness was so bad – it was almost as though the baby knew what a sick situation I was in.

He towered over me in the doorway. “He stinks.  Change him.” He turned sideways, admitting our toddler.

“I can’t…I’m sick…”, the words drooled out of my mouth with the last bit of vomit.

“Well…you’re not pregnant,” he spit at me from the doorway.

“Alright, I’m not” I responded, with a bitter sarcastic tone, my arms around the seat of the toilet.

“Well…its not mine” he said as he turned and walked away, after pushing our son further into the room.

My son put one hand on my shoulder, and his thumb in his mouth.  I folded against the cold tile wall trying not to let the smell of his diaper overwhelm me.  Huge tears spilled down my face and silent sobs racked my body.

The lawyer understood.  I had no fight in me.  I never did. That’s why I’d been so sick for so long. My marriage was one big fight.  And I wasn’t a fighter. I didn’t like confrontation. I’d rather avoid and hide. My body’s response was to make me physically ill.

He took my hand…and told me to get the test. We both knew what the result would be.

Leaving while pregnant was hard. But it would have been so much harder to stay.

This post originally appeared on Live by Surprise on October 1, 2015.