The Eyes Have It! 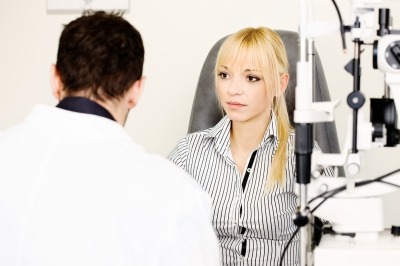 What is the first thing that you do every single day (I mean after you hit the snooze button)? When did that step in your routine begin?

Every morning, first thing when I get up, I turn to my bedside table and grab my glasses.  I’ve been wearing glasses since I was two years old.  I have a congenital defect which has caused astigmatism in my eyes. Basically, one of my eyes tends to turn in towards my nose. It seems the gene is passed mostly to females in my mother’s family. Two of my cousins have a similar issue, and because I was diagnosed first, their’s was identified more quickly.

The glasses have corrected my issue (so far as I’m aware) since I was two. I can’t tell you precisely how the glasses work —but my eye goes back to where it’s supposed to.

I took some horrible teasing about it when I was a child. In the late seventies and early eighties, children’s glasses were not the fashion pieces they can be today. I looked like I was wearing coke bottles.  And with my slight stature, they were the first thing you saw. I choose more fashionable lenses now. Durable, because kids. They constantly have fingerprints on them.

I tried contacts twice—once in my teens and once in my early twenties. I had issues putting my fingers that close to my eye—and I didn’t like the way they felt. There was just too much fuss to get them in and out and clean them. So I didn’t wear them anymore.

Two of my three children suffer from lesser versions of the same issue—they’ve all been seeing ophthalmologists since they were babies. So far, only the eldest has glasses, and only when he’s reading.

I’ve been asked by one of my children’s doctors why they didn’t correct it surgically when I was a child—I didn’t even know it was an option. I suppose I could look into it now, given the advances in laser eye surgery—but I’m so used to my glasses, and I see reasonably well both with and without them (it takes more effort to focus without them). And, to be honest, I’ve had enough surgery in my life. I don’t want any more.

That being said though, given my issues, I’m hyper-aware when someone else’s eye turns. I find it horribly disconcerting.  Not because they don’t appear to be looking at me—more because I worry that I do the same thing and I don’t know it.

I had a meeting with an upper-level manager that I’d never met before. He was wearing glasses. He was talking to myself and another co-worker at the same time. His eye issue made it difficult to identify which of us he was speaking to, as we were both across the table from him. Luckily it was a short meeting, and we figured it out. But it was very awkward.

I had a similar experience at parent’s night at the school. The mother of my son’s friend was speaking to me, but it took a minute to register, as it appeared that she was looking to the left of me.

Every time I have an experience like that, I wonder if my eye does that. I can feel it sometimes wandering a bit—especially when I’m tired. Even when I have my glasses on. I tend to cast my head down if I’m not sure.

When you really think about it, you’d be amazed the social cues that your eyes give. Pointing them in in a specific direction indicates attention and focus. When someone’s eyes are not looking at you…you become disengaged with the speaker. It’s feedback that we expect.

I don’t think it’s a problem for me most of the time. I’ve asked close friends and relatives, and they’ve all said they’ve never noticed it. Hubs will occasionally suggest he can tell I’m tired because my eye appears to be looking at my brain (he’s actually nicer about it…) – but it usually when we’re already in bed. Luckily, having experienced the other side, I know I’ve never experienced any awkward exchanges where the person looks to see if I’m talking to someone else.

I have long expected someday that they’ll start to fade—but at my last checkup, the doctor said that with glasses I should be fine as long as I have regular check-ups.

How are your eyes? Do you get regular check-ups?

This post originally appeared on Live by Surprise on November 9, 2015. It has been updated.