The Grandmother Diaries: Memories and Deaths 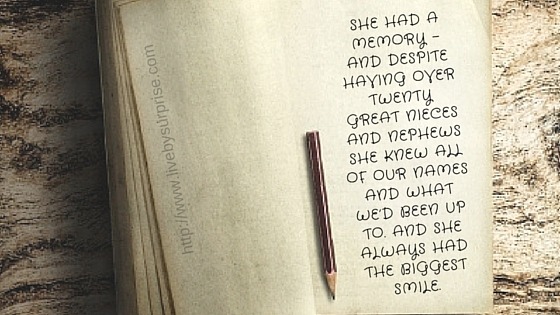 Two days ago, I found out that one of my favorite Great Aunt Jill had died.

Her husband, my Nan’s brother, died while I was bursting pregnant with my eldest.

I realized as I received the news of Jill, I have no actual memories of my uncle, even though he survived to my thirtieth year. As I was reading my other Gran’s diaries today, I realized I have no memories of any of my mother’s aunts or uncles aside from Jill. Nan is the last. Her sister, who my mother is named for, became a nun. And helped people. Before she killed herself in her fifties.

Her half-brother is mentioned in Gran’s diary on April 10, 1987. The entry suggests my Nan’s half-brother had died and we went to the funeral. I have no memory of the funeral – even though I would have been 12 at the time.

And Jill’s husband – the only memory I have of him is going to his funeral about two weeks before my son was born. The only memory.

He and my aunt had five children altogether. They lived in a small house not far from the local children’s hospital. Their last child, Sandy, has Down Syndrome. I’m sure it was hard on their marriage – five kids alone is a pressure, but a special needs child only adds to the mix. They did their best though. The four eldest all got married and all had children who are close in age to me.

As I said though, I have no actual memories of my uncle. I’m not sure why – but he was either very antisocial or not physically well. Seems to me it was the latter.

But Aunt Jill…she was a very vibrant woman. When her son was born, it was common to ship children with Downs away – she wouldn’t allow it. She spent the better part of fifty years working with him. His mental age is around the level of an eight-year-old. But she can take full credit for it. He wouldn’t be the man he is today without her. He’s very polite – and since she’s been in the home, he’s also been in a home. He has a job. And once a year, he makes a trip to the Elvis festival. He even has his own costume.

The thing I remember most about her though was that she listened. She was always very social – she knew how to work a room. She always made a point of speaking to everyone. If only for a few minutes. And people would go out of their way to speak to her as well.

I always made a point of seeking her out. She always had something interesting to say. We had a large family – but I likely only saw her once every two or three years. She had a memory – and despite having over twenty great nieces and nephews she knew all of our names and what we’d been up to. And she always had the biggest smile.

I hadn’t seen her for a while – but I sent regular letters and pictures. I don’t know if she enjoyed them – she couldn’t write back. But I hope so.

I’m not even through the first book yet…there will be more. But if you’ve missed the grandmother diaries – you can catch up.

This post originally appeared on Live by Surprise on August 24, 2015. It has been edited.

2018-10-13
Previous Post: Value the Air You Breathe
Next Post: 8 Reasons I Didn’t Go to the Office Christmas Party