Sunday Confession: I Farted at a College Level Debate 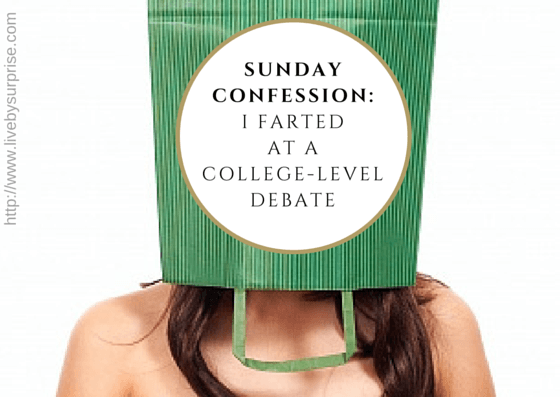 When I was in college, I was the ultimate nerd. I was pretty introverted, and I spent most of my time studying and studiously avoiding any interaction with my co-horts (I know, hard to believe right)?

There was one group that I did join as soon as I got to college. The college debate team had coached our high school team. As I was friendly with two of the coaches, and not sure where to start, I signed up on my very first day.

The debate team was a group of nerds (so I felt very at home). We had weekly meetings and there were opportunities to meet nerds from other colleges at weekend debating tournaments. We typically didn’t venture more than a few hours drive – but there were a few tournaments within that distance and we went to one in November of my first year.

Our team did reasonably well the first night – and we decided to go out for dinner to celebrate. I didn’t know it at the time, but about a month later I was diagnosed with an intolerance to both corn and soy, as well as issues with MSG. I’ll bet you can’t guess what was in the Chinese food…

The morning of the second day, my stomach was a little off, but I was excited for the mornings activities. My partner and I had rocked it the night before easily beating the team from the rival school. Our first debate of the day was held in a giant lecture hall that would normally hold over 100 students. The hall was empty save for the debaters, two judges, a timer, and a couple of members of each of the teams as a cheering section. There was a stage at the front and desks had been placed on both sides for each of the debaters – and a lectern was in the middle for our presentation.

We were on the opposing side, so when we received the topic, my partner and I had a quick discussion about how we would approach the argument. When time was called, the other team’s first debater stood up and presented their case. My partner and I followed and passed a few notes back and forth. I was feeling pretty confident – as the subject was something we’d debated before and were prepared to argue.

When it was my turn, I walked up to the podium and immediately realized that I was going to have a problem. My stomach was rumbling and I could feel the call of the wild burrito. Sweat glistened on my brow. I couldn’t leave – it was my turn and they’d already started the clock. So I did what any good debater would do – and I clenched that heinie hiccup inside me and held on for dear life.

It is incredibly difficult to concentrate on both an intensely mental challenge and an even more intense physical one at the same time. But I took a deep breath, looked at my notes and started talking. I gained confidence as I clamped even more tightly and stated my case with enthusiasm. While I’m normally very demonstrative in my speech, my hands clutched the side of the podium in an effort to remind myself to keep my butt bongos from riffing a melody. I looked around the room at the judges as I continued my allotted five minutes – and saw the timer motion that I had less than a minute left. And just as the thought “I’m going to make it” entered my mind, I mistakenly lifted my hand from the podium to emphasize a point, and my butt tuba let Polly out of jail.

This was no normal fart. As the auditorium was built for lectures – it had excellent acoustics. Despite the size of the hall, the debaters weren’t given a microphone. Before I even had a chance to yell “fire in the hole”, my rectum ripped a human hydrogen bomb that may have damaged the hearing of some of the people in the room. My eyes wide and my ears ringing, I swallowed my panic. I couldn’t look at the judges. I cast my eyes down at my papers, let out a quiet “excuse me”, stumbled out something like “and that’s why our argument is the right one” and left the podium for the desk where my partner was gaping at me open mouthed. I sat down, put my fingers to my temple and waited for the next debater to take the stand.

Luckily the power behind my cheek squeak had spread the gas bomb fairly widely, and because it was not an SBD, there wasn’t much smell. The debate’s timer still allowed more than the normal amount of time for the next debater to take the stand (either to allow the air to clear or because he also took some time to recover). I don’t remember much of the rest of the debate (and I suspect the judges were also gassed into submission) because we actually won the debate.

Later, when our team went down for the after-debate party, there was a slight hush as I entered the room. I’m reasonably certain that I’m not the only one who tells people that story, albeit from a different perspective. That day was the stuff of legend.

So…now that I’ve shared my booty bomb story – I’ll bet that you have one too. Share it in the comments and make me feel a little better? Unless you were in the hall that day. Then…I don’t want to know.

2015-08-30
Previous Post: What’s that Spot? Business Attire for the Working Mom
Next Post: Book Review/Warning: The Rabbit Who Wants to Fall Asleep is Dangerous!