What Happened in Paris? 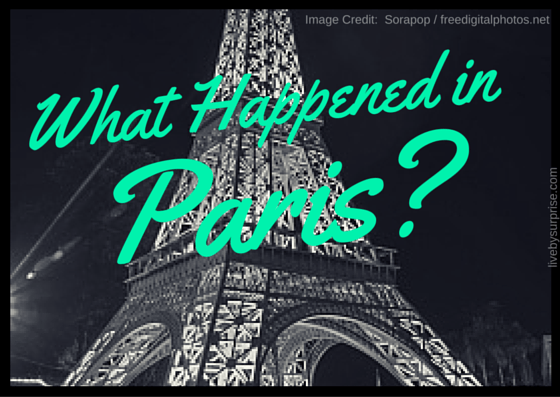 I don’t know if you can picture my big sigh as I write this post.  My heart is so heavy, I’m having trouble carrying it.

Last night, my older two returned home after a weekend with their dad.  As I was putting my son to bed, he asked what happened in Paris.

What happened in Paris?

For my son, I went through a sanitized physical description because of his tender age.  Some very angry men strapped bombs to themselves, took guns and went into crowded places to cause chaos and destruction.

I told him that media reports suggested that the people involved were likely all part of a militant group and that this was a coordinated attack.  That they claimed the same religious  and ethnic background.  That some of them were from parts of the world where these types of things are, sadly, normal occurrences.  And lots of people from those parts of the world (and especially Syria) were trying to escape to more peaceful countries – because they can’t understand it either.

I tried to leave him with several messages:

Have you discussed terrorism with your children?  What do you say?

This was my seventeenth post for #NaBloPoMo, #NaNoPoblano and the YeahWriteMe NoMo Challenge.